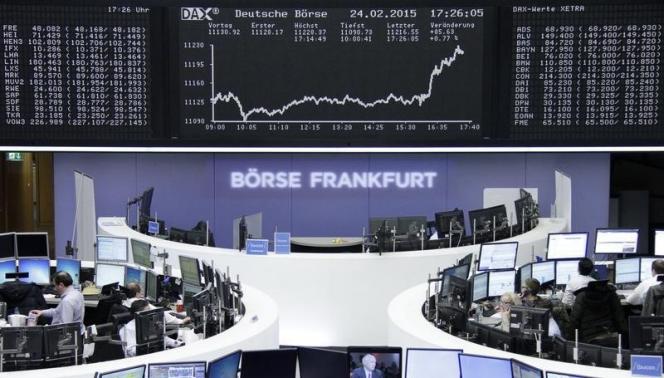 LONDON (Reuters) - World stocks were within touching distance of an all-time high on Wednesday as investors cheered signals from Federal Reserve Chair Janet Yellen that the US central bank would not rush into raising interest rates. Markets, still on high after the euro zone agreed to extend Greece's aid deal, were given a further lift as slightly better-than-expected Chinese factory activity data helped ease concerns about the extent of the country's economic slowdown. European bourses opened little changed, happy to take a breather after six days of unbroken gains and a surge since the start of the year that has seen the benchmark FTSEurofirst 300.FTEU3 race up roughly 17 percent. Following more rises for Wall Street and in Asia overnight, MSCI's 46-member All Country World Index .MIWD00000PUS was up 0.2 percent at 433.74 points and straining for the 434.24 all-time peak it scored back in September. "All the stars have been aligned recently, we have had the lower euro, the lower oil and the lower cost of funding," said Didier Duret, chief investment officer at ABN Amro. "For the rally to continue we now need two things. The recovery has to be driven by hard facts, the consumer and manufacturing. And we need the hope that the Fed won't be too aggressive with hiking rates and yesterday we got that message." Yellen had told Washington's Senate Banking Committee that the US central bank was preparing to consider interest rate hikes "on a meeting-by-meeting basis", but that she and her colleagues would provide markets with a clearer signals before they moved. That was a subtle change of emphasis in how the Fed has been speaking about its plans, as it suggests though a hike could still come as early as June, a later date is also possible against the backdrop of weak US inflation and a sluggish global economy. The dollar .DXY had dropped in the wake of Yellen's comments overnight and continued to slip against a basket of currencies in early European trading. [/FRX] It fell 0.2 percent against the yen to 118.73 yen JPY=, while the euro was up 0.3 percent at $1.1375 EUR=. Sterling too, was up by a similar margin at $1.5502 GBP=D4. FRAGILE CHINA In China, the world's second largest economy, the closely watched flash HSBC/Markit Purchasing Managers' Index (PMI) inched up to 50.1, above the 50-point level that separates growth in activity from a contraction on a monthly basis. It beat consensus estimates for a reading of 49.5 even as China's manufacturers still face considerable risks from weak foreign demand and deepening deflationary pressures. "We believe more policy easing is still warranted at the current stage to support growth," said Qu Hongbin, HSBC's chief economist in China. MSCI's broadest index of Asia-Pacific shares outside Japan .MIAPJ0000PUS had ended up 0.85 percent, though Japan's Nikkei .N225 snapped a five-day winning streak after hitting a 15-year high in the previous session. A backdrop of weakening global growth has been keep investors on the edge about the Fed's plans, with some worrying a premature start to the US rate hike cycle could dent momentum in the US economy even as Europe and China continue to struggle. Because Yellen gave no sign of an imminent rate increase, investors piled back into US Treasuries, sending benchmark 10-year yields US10YT=RR back below 2 percent and two-year yields to 2-1/2-week lows US2YT=RR. News on Tuesday that euro zone partners had approved Greece's reform plan, a requirement for Athens to receive a four-month extension to its bailout, continued to help European bond markets, although Greece itself saw its yields nudge slightly higher. GR10YT=TWEB Among commodities, oil overcame pressure from expectations that this week will show US crude inventories rising again, garnering support from news of a shutdown of Libyan oilfields. Brent LCOc1 added about 0.5 percent to $58.98 a barrel, though US crude CLc1 edged down slightly to $49.19. Gold XAU= added about 0.9 percent on the day to $1,211.30 per ounce as it inched off a seven-week low.