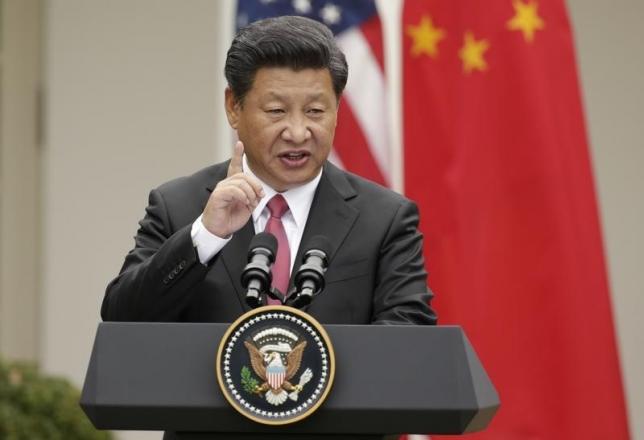 WASHINGTON – US President Barack Obama expressed concerns about Chinese militarization of artificial islands in the South China Sea to China's President Xi Jinping on Friday, but Xi denied any plan to establish military strongholds there. Obama said their summit talks included a "candid" discussion on Asia-Pacific disputes, focusing on growing tensions in the South China Sea where China has competing territorial claims with several Southeast Asian countries. "I conveyed to President Xi our significant concerns over land reclamation, construction and the militarization of disputed areas, which makes it harder for countries in the region to resolve disagreements peacefully," Obama said. He spoke with Xi at his side during a joint news conference in the White House Rose Garden. The Chinese leader is on his first state visit to the United States. China has said repeatedly that the artificial islands it has built up on disputed reefs would be used for military defense and analysts say satellite pictures show it has completed one military length runway and appears to be working on two more. Admiral Harry Harris, commander of U.S. forces in the Pacific, told the Aspen Security Forum in July that China was building hangers on one of the reefs - Fiery Cross - that appeared to be for tactical fighter aircraft. Xi, however, denied that militarization was taking place. "Relevant construction activity that China is undertaking in the Nansha Islands does not target or impact any country and there is no intention to militarize," Xi said, using the Chinese name for the disputed Spratly archipelago. "Islands in the South China Sea since ancient times are Chinese territory," Xi said. "We have the right to uphold our own territorial sovereignty and lawful legitimate maritime rights and interests." Xi also reiterated that China is committed to freedom of navigation in the sea and to resolving disputes through dialogue. He said Beijing and Washington had a shared interest in this regard. Washington analysts and U.S. officials say the militarization of the islands has already begun and the only question is how much military hardware China will install. U.S. experts say satellite photos from early this month also show China was carrying out dredging work around the artificial islands, a month after saying it had stopped. Harris said last week that China's runway building and further militarization of the artificial islands was of "great concern" and posed a threat to all countries in the region. Jane's Defense Weekly published new satellite images of Fiery Cross taken on Sept. 20 that it said showed China had completed the runway on the reef and was moving closer to making it operational. Jane's said completion of the runway could allow China to accelerate construction of infrastructure and to start air patrols over the disputed islands. –Reuters