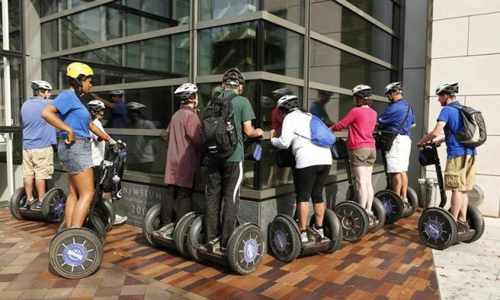 BEIJING - Chinese transportation robotics firm Ninebot said on Wednesday it has acquired U.S. rival Segway Inc, the company behind the self-balancing scooter that became a technological marvel when it was launched in the early 2000s but whose hype then faded. Financial details of the deal were not disclosed, but Ninebot Chief Executive Gao Lufeng said at a press briefing in Beijing that Chinese smartphone maker Xiaomi Inc and venture capital firm Sequoia Capital China, among others, had invested $80 million into Ninebot to help finance the acquisition. New backers of Ninebot, which began producing scooters two years ago as a crowdfunded project, also include Xiaomi Chief Executive Lei Jun's personal private equity fund Shunwei, Gao said. The acquisition comes about half a year after Segway named Ninebot in a patent infringement complaint in September 2014. Gao did not address the dispute on Wednesday but told reporters the combined company would hold a significant lead in market share as well as a vast portfolio of over 400 critical patents. The companies would operate as separate brands, he said. Ninebot, which has several self-balancing scooter models including one without handles, known as the "One", will now have "the most comprehensive lineup of products in the industry", Gao said. Ninebot's high-profile backers, Sequoia Capital China partner Neil Shen and Xiaomi CEO Lei, both struck a nationalistic note in remarks toasting the deal. "I have long thought Chinese companies should have more courage," said Shen, one of China's most prominent tech investors. "This acquisition is a display of Chinese self-confidence." The acquisition caps a 14-year independent run for Bedford, New Hampshire-based Segway, which never lived up to the initial hype in 2001, when inventor Dean Kamen unveiled to the American public a scooter that could be driven simply by shifting one's weight and turned it into a pop culture icon. Kamen vowed on television the Segway would revolutionize transportation much like the automobile, but it became widely regarded as a mainstream sales failure despite some law enforcement and industrial uses. Lei, one of China's richest men, showed off riding a Ninebot for photographers on Wednesday and explained that he invested in the company because he always found self-balancing vehicles the best "toys for adults". When prompted by an event MC, Lei added that Xiaomi's investment in Ninebot made sense for the smartphone company because Xiaomi's strategy was to support smart hardware companies everywhere and build a device ecosystem around its smartphones. - REUTERS