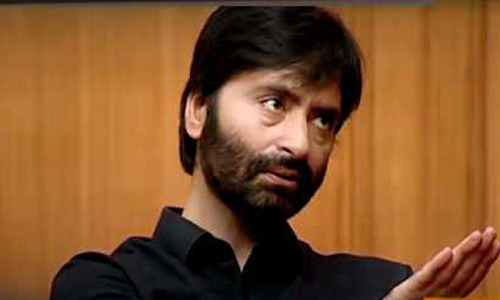 SRINAGAR – Police arrested Yasin Malik, chief of the Jammu Kashmir Liberation Front, for observing a hunger strike against residential colonies for Hindu Pundits on Saturday, reported 92 News. Yasin Malik said that a seminar will be held against resettlement of Hindu Pundits in the Valley. He added that people from all schools of thought will participate in the seminar. He vowed that the Kashmiris will not let such conspiracy succeed in which people will be divided on the basis of religion. “Muslims, Hindus and Sikhs will give a proof of religious harmony against this division,” he maintained. Talking to 92 News, Mishal Malik, wife of Yasin Malik, said that India is always in search of pretexts to subject Kashmiris to atrocities. Meanwhile, a complete strike was observed in all over the Valley. Earlier, Hurriyat Conference (M) chairman Mirwaiz Umar Farooq was put under house arrest. Hurriyat chairman Syed Ali Shah Geelani and other leaders are already under house arrest.