SRINAGAR (KMS) – In Occupied Kashmir, Indian forces arrested Hurriyat leader Yasin Malik along with several other Hurriyat leaders and activists to prevent them from leading a peace march towards Lal Chowk on Tuesday. Jammu and Kashmir Liberation Front (JKLF) Chief Muhammad Yasin Malik, was arrested as he reached Ghanta Ghar (clock tower) area of Lal Chowk, this morning. He with his supporters offered Fajr prayers at Koker Bazar masjid. As he tried to lead the protest towards the Lal Chowk, Yasin Malik was taken into custody along with his supporters by the Indian police. Addressing media persons before his arrest, the JKLF Chairman warned of strong agitation if the killings were not stopped in the occupied territory. 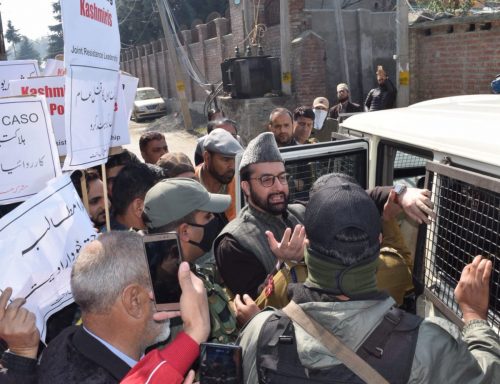 Hurriyat Conference Chairman Mirwaiz Umar Farooq was detained when he along with hundreds of supporters tried to march towards Lal Chowk, Srinagar, to participate in the sit-in protest called by the Joint Resistance Leadership against Kulgam killings where toll reached 10 and unabated state terrorism unleashed by Indian troops in every nook and corner of the territory. He was lodged in Nigeen Police Station. The police also arrested Jammu and Kashmir Salvation Movement Chairman Zafar Akbar Butt when he defied house arrest and tried to proceed towards the Lal Chowk to join the sit-in protest. 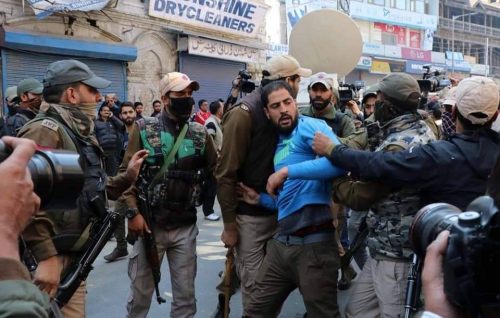 On the other hand, Syed Ali Gilani, Muhammad Ashraf Sehrai, Agha Syed Hassan Al-Moosvi Al-Safvi, Engineer Hilal Ahmed War, Bilal Siddiqi, Mukhtar Ahmed Waza, Muhammad Yasin Attai and many other Hurriyat leaders have already been put under house arrest or in custody. APHC leader Yasmeen Raja visited SMHS hospital Srinagar to inquire about the heath condition of the youth injured by Indian forces in Laroo area of Kulgam on Sunday. Talking to the media, she said that India had unleashed barbarism in the territory to suppress the freedom struggle.