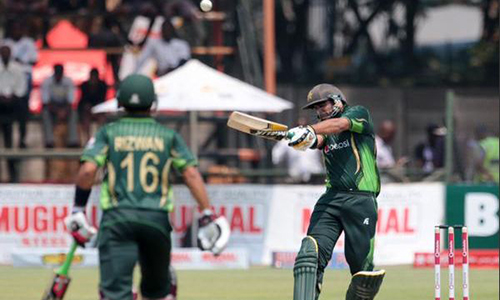 HARARE – Yasir Shah wrecked Zimbabwe's batting lineup with six for 26 as Pakistan cruised to a 131-run win in the opening one-dayer at the Harare Sports Club on Thursday. Zimbabwe were bowled out for 128 in 37 overs after Pakistan had piled up 259 for six. A century partnership from Mohammad Rizwan and Imad Wasim set the touring side up for victory but it was the leg breaks of 29-year-old spinner Yasir that proved decisive. Imad and Rizwan shared a stand of 124 for the sixth wicket to help Pakistan recover after they had slumped to 35 for three. Rizwan scored a career-best 75 not out and Imad, run out for 61, struck a maiden international half-century. Zimbabwe then lost wickets at regular intervals in their reply. Sean Williams top-scored with 26 as Yasir returned his best ODI figures and off-spinner Shoaib Malik claimed three for 30. The second game in the three-match series, all being played at the Harare Sports Club, is on Saturday. –Reuters