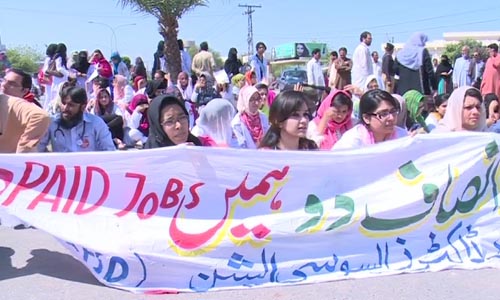 LAHORE/FAISALABAD (92 News) –  The Young Doctors’ Association's (YDA) ended after doctors took to the streets second time this month on Thursday, to protest against what they called “injustice”, demanding service structure reforms for doctors. Earlier today, the YDA closed all OPDs in the government-run hospitals in Lahore and Faisalabad. Taking to the streets, they blocked important roads for traffic. The protestors demanded that the government of Punjab fulfill its commitment of bringing reforms in the service structure for doctors. The docors were holding playcards and banners with calls to push the government to fulfill its commitment. On the other hand, patients arriving at the closed doors of Hospitals faced extreme difficulty on part of treatments. “We have come here after a 3 hours journey by bus, only to find the doors closed,” said a helpless oldage woman, waiting outside the OPD. The YDA has been protesting off and on over the past years, against what they call “injustice” in the service structure of doctors. They demand exclusive salary packages for doctors and induction in a higher grade (18) than all other employees are hired in (17).