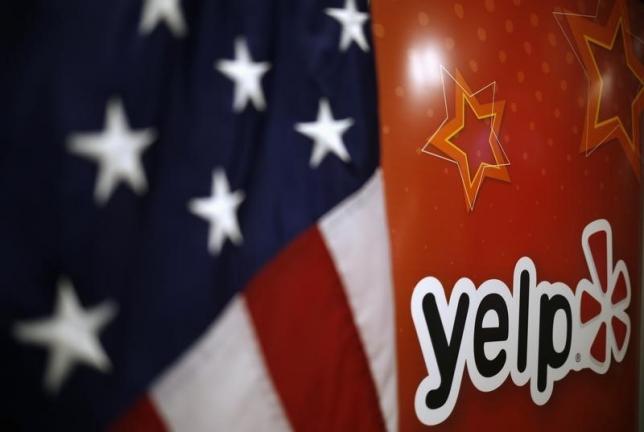 CHICAGO - Consumer review website operator Yelp Inc reported a smaller-than-expected loss, but its shares slumped 11 percent, swept up in a broader selloff in the technology sector coupled with a weak adjusted EBITDA forecast.

The company said results were released about 3 hours ahead of schedule during trading hours on Monday, due to an error by PR Newswire, leading to a spike in volatility in its shares.

Yelp also said Chief Financial Officer Rob Krolik would step down later this year but did not elaborate. Krolik, who joined in 2011, will continue in his role until Dec. 15, 2016, or until a replacement is hired, the company said in a statement.

The company said it expected 2016 adjusted earnings before interest, taxes, depreciation and amortization (EBITDA) of $90 million to $105 million. The company forecast first-quarter adjusted EBITDA of $10 million-$12 million, lower than $16.3 million a year earlier.

"The guidance was a little light for first quarter and FY 2016 EBITDA and that seems to be an issue for investors," said Needham & Company analyst Kerry Rice.

Yelp is expected to spend about $14 million on marketing in the first quarter, which will weigh on the adjusted EBITDA, Krolik told analysts on a conference call.

Yelp's revenue rose about 40 percent in the fourth quarter, topping analysts' estimates, helped by the strength in its advertising business and a rise in mobile usage.

Local advertising accounts in the quarter rose 32 percent to about 111,000, in line with estimates from market research firm FactSet StreetAccount.

The San Francisco-based company has been trying to expand outside the United States and diversify into services including restaurant bookings, event management and payments to counter increasing competition.

The company said it expected to report net revenue of $154 million to $157 million in the first quarter, largely above the $154.4 million estimated by analysts.

On an adjusted basis, the company posted a loss of 2 cents per share, while analysts were expecting a loss of 3 cents. Revenue rose to $153.7 million from $109.9 million. Analysts had expected revenue of $152.4 million for the quarter. -Reuters