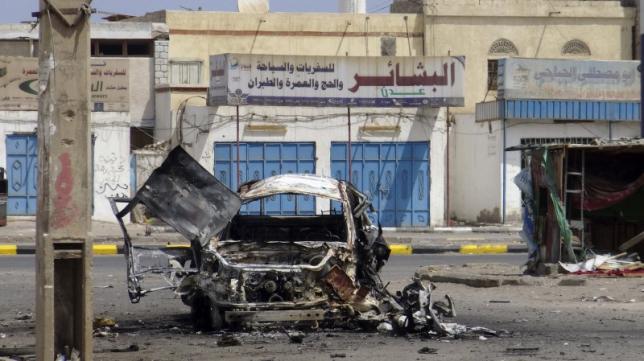 ADEN – Three suicide bombers struck security checkpoints in the southern Yemeni city of Aden on Friday, killing at least 26 people, residents and security sources said. Dozens of people were also wounded in the attacks, for which Islamic State claimed responsibility and which coincided with the first anniversary of the start of civil war in Yemen. In one of the blasts, an ambulance laden with explosives was detonated as it arrived at a military checkpoint in the Buraiqa area in northwestern Aden, killing about 14 soldiers and civilians, eyewitnesses and security sources said. The other two bombs hit checkpoints on the road to a base used by the Saudi-led military coalition that is fighting in Yemen. Security sources said at least 12 people died, though with no immediate reports of coalition soldiers among the casualties. Nizar Anwar, a spokesman for the local government in Aden, said the bombers were targeting the coalition command base but local fighters guarding the checkpoints prevented them from reaching their targets. "More than 20 people were killed, most of them civilians," he said in a statement. Amaq, a news agency affiliated with Islamic State, said the group's Yemeni wing claimed all three attacks and that at least 27 people had died. The blasts ended a near one-month lull in the violence that has plagued the port city, which fighters loyal to Yemen's president Abd-Rabbu Mansour Hadi recaptured from the Iran-allied Houthis, a local militia, in July. The Saudi-led coalition entered Yemen's war a year ago to try to prevent the Houthis and forces loyal to ex-President Ali Abdullah Saleh from taking control of the country. Other armed groups including Islamic State and al Qaeda's local wing have thrived in the chaos. –Reuters