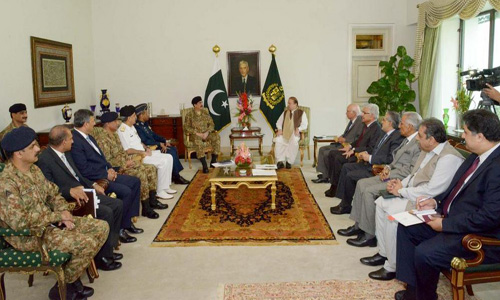 ISLAMABAD (92 News) – Prime Minister Nawaz Sharif has summoned the joint session of parliament on Monday to decided whether to join the Saudi-led military campaign in Yemen. He was presiding over a high-level meeting on Thursday. The prime minister said that Pakistan will defend sovereignty and security of Saudi Arabia. "Given the close historical cultural and religious affinities between the people of Pakistan and Saudi Arabia, it has been reaffirmed that any isolation of Saudi Arabia's territorial integrity will evoke a strong response from Pakistan," said a press release issued by PM House. “The prime minister further emphasized that all decisions in the matter will be taken in accordance with the wishes of the people of Pakistan. To this end, the prime minister is advising the president to convene a joint session of parliament on Monday to discuss this matter of national importance." The meeting was attended by Minister for Finance Ishaq Dar, Minister for Defence Khawaja Muhammad Asif, Advisor to PM Sartaj Aziz; SAPM Tariq Fatemi, Chief of Army Staff General Raheel Sharif, Chief of Air Staff Air Chief Marshal Sohail Aman, Acting Chief of Naval Staff Vice-Admiral Khan Hasham bin Saddique, Foreign Secretary and other senior officers. Meanwhile, Chief of Army Staff General Raheel Sharif and Special Assistant to PM on Foreign Affairs Sartaj Aziz, Defence Minister Khawaja Asif briefed the prime minister about the meetings with Saudi authorities. Meanwhile, Prime Minister Nawaz Sharif will visit Turkey on Friday (tomorrow).