Yemen foes fight on despite declared end to Saudi strikes 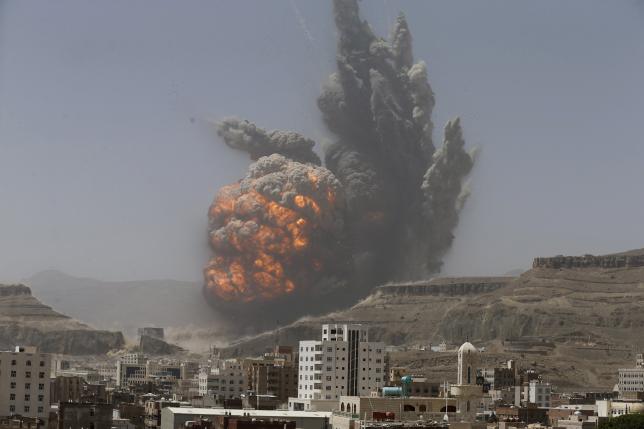 Yemen foes fight on despite declared end to Saudi strikes

CAIRO/ADEN - Rival forces fought on in Yemen on Wednesday despite a declared halt to a Saudi-led bombing campaign, showing how tough it may be to find a political solution to a war stirring animosities between rival Gulf powers Saudi Arabia and Iran. Tuesday's announcement by Riyadh that it would end its campaign of air strikes against the Iranian-allied Houthis drew positive responses from both the White House and Tehran, as well as fresh calls for peace talks and for urgent deliveries of humanitarian aid. But hours later, Houthi fighters captured the compound of an army brigade loyal to the government in Yemen's central city of Taiz following heavy fighting. A Saudi air strike was conducted on the brigade headquarters shortly afterwards, residents said. The brigade, along with several other formations, had declared its loyalty to exiled president Abd-Rabbu Mansour Hadi, opening up a new front in the conflict against the Houthis. Militiamen in southern Yemen said late on Tuesday they would continue fighting the Houthis until they drove them out of the region, despite Saudi Arabia saying its month-old campaign against the Houthis had met its goals. Southerners and Houthis fought clashes on Wednesday around the southern town of Dalea, a hotbed of southern separatism which has changed hands several times in the conflict. "This front will not stop its fight until all the south is purified from the Houthis and pro-Saleh forces," a statement by a group called the southern resistance movement said. DIALOGUE The southern movement brings together southern civilians, former army officers and members of a southern secessionist movement to oppose the Houthis, who are fighting alongside troops loyal to former Yemeni president Ali Abdullah Saleh. Saleh himself welcomed Saudi Arabia's announcement and called for the renewal of political dialogue, according to a statement on his Twitter account. "We hope that everybody will return to dialogue to solve and treat all the issues," Saleh, a powerful ally of the Houthis, said in the message, which was also posted on his Facebook page. Saudi Arabia said on Tuesday it was ending month-long air strikes against the Houthis, whose seizure of swathes of Yemen in recent months has stirred Saudi fears that Iran is acquiring decisive influence in a country Riyadh sees as its backyard. Residents said the capital Sanaa had had a quiet night, a respite from almost nightly raids since the campaign began on March 26. Saudi Arabia said a new phase called "Operation Restoring Hope" would now begin in which political, diplomatic and military action would be combined but the main focus would be on the political process. Saudi Arabia's leading role against the Houthis has turned Yemen into the latest theatre of a regional proxy conflict between the Gulf's leading Sunni Muslim and Shi'ite Muslim powers - a struggle also playing out in Syria, Lebanon and Iraq. SHORTAGES OF FOOD The conflict has also created desperate shortages of food and other supplies in Yemen, where sea and airports are closed. The World Health Organization said on Tuesday that 944 people were reported killed and 3,487 wounded in Yemen in the four weeks up to Friday. Houthi politburo member Mohammed al-Bukhaiti on Tuesday accused the United States of worsening a "siege" of the country by sending warships to the waters off Yemen. The United States said on Monday an aircraft carrier and guided-missile cruiser had gone there to join seven other US warships already in the area. The Pentagon said the ships were there to ensure freedom of navigation through the area, which is vital to oil shipping and controls approaches to the Red Sea and the Suez Canal. It said the ships were also watching a flotilla of Iranian cargo vessels that had approached Yemen. The U.N. Security Council has imposed an arms embargo on the Houthis, and the Saudi navy has imposed a naval blockade around the country. President Barack Obama warned Iran on Tuesday not to send weapons to Yemen that could be used to threaten shipping traffic in the region. "What we've said to them is that, 'If there are weapons delivered to factions within Yemen that could threaten navigation, that's a problem,'" he said. Iran called for all sides in Yemen's conflict to start negotiations, saying long-term peace was possible. "History has demonstrated that military intervention is not a proper response to these crises and will instead exacerbate the situation," Iran's President Hassan Rouhani said at an Asian-African conference in Jakarta. The United States and Saudi Arabia have accused Shi'ite Iran of arming the Houthis, a claim Iran denies. - Reuters