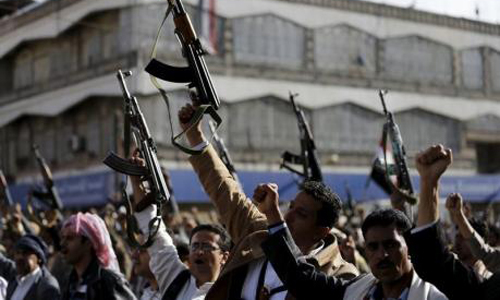 ADEN - A unit of Houthi rebels and allies backed by tanks pushed into central Aden, the main foothold of fighters loyal to President Abd-Rabbu Mansour Hadi, witnesses said on Wednesday, despite a week of air strikes by Saudi-led coalition forces. The alliance of mainly Sunni Gulf Arab states has also attacked the northern Shi'ite Houthis from the sea but their advance toward the southern port city has been relentless. Hadi's aides expressed alarm. "What's happening now would be a disaster for Aden and its people, if Aden falls" Reyad Yassin Abdulla told Al Jazeera television. The Houthi movement was jubilant. "We can say that after a week of bombing on Yemen the aggressors have not achieved any result ... The victories in Aden today embarrass this campaign and silenced the aggressor states," Houthi spokesman Mohammad Abdulsalam told the militia's al-Maseera television. Asked for his reaction, a Saudi military spokesman said Houthi forces had been in Aden before the alliance began its campaign on March 26 and had fought daily battles against the people of the city. Tanks appearing there had always been a possibility, he said without elaborating. The Houthis, with vital support from army units loyal to former president Ali Abdullah Saleh, emerged as the dominant force in Yemen after they took over the capital six months ago and they now control much of the Arabian Peninsula country. Aden residents said they saw groups of fighters carrying rocket propelled grenades and accompanied by four tanks and three armored vehicles in the Khor Maksar district - part of a neck of land linking central Aden to the rest of the city. The unit met strong resistance from local militias and residents said they saw eight bodies of Houthi fighters on the street. Rocket fire fell on the central Crater district. Many people fled the area and some were trying to get on a ship leaving the port. Earlier on Wednesday, dozens of fighters were killed in clashes between Houthi fighters and their army allies on one side, and militiamen and tribesmen opposing them around Aden and elsewhere in south Yemen, witnesses and militia sources said. Hadi left the city on Thursday for Saudi Arabia, whose stated aim is to restore him to power. In Dhalea, 100 km (60 miles) north of Aden, air strikes supported militiamen fighting street battles against the Houthis, who are allied with Saudi Arabia's regional foe Iran, and backed by army units loyal to longtime ruler Saleh, who was pushed out three years ago after "Arab Spring" demonstrations. Ten of the militia fighters were killed, residents said, but Houthi forces and allied army units were being pushed back. The Houthis suffered heavier losses in battles with tribesmen at a major army base in the southeastern province of Shabwa, where 35 Houthi and army fighters were killed along with 20 tribesmen. Meanwhile, the Saudi-led air attacks continued on targets nationwide overnight. An explosion at a dairy factory in Yemen's Hodaida port killed at least 25 workers, medical sources said, with conflicting accounts attributing the blast to an air strike or to a rocket landing from a nearby army base. The 26September website of Yemen's factionalized army, which mostly sides with the Houthis, said 37 workers were killed and 80 wounded at the dairy and oils factory "during the aggressive air strikes which targeted the two factories last night". Medical sources in the city said 25 workers at the plant had been killed at the factory, which was located near an army camp loyal to Saleh. Residents and witnesses contacted by Reuters said the air strikes had targeted the factory shortly after midnight on Wednesday. Others said rockets fired from the base - possibly as retaliation against the bombings - hit the factory. Other air strikes hit Houthi positions along the Saudi border in Yemen's far north, an army base in the central highlands, air defense infrastructure in the eastern Marib province, and a coastguard position near Hodaida. A raid at a coastal defense station at Maidi port in Hajja province north of Hodaida killed six soldiers, workers there said, while further strikes hit an army camp in Sanaa and a government facility in Saadeh in the north of Yemen. UNICEF said that at least 62 children had been killed and 30 wounded in the violence over the past week, and the United Nations said an attack on a refugee camp in northern Yemen, which medics blamed on an air strike, broke international law. Not including Wednesday's toll, 103 civilians and fighters had been killed in the city since clashes began last Tuesday, Aden-based NGO the Field Medical Organisation said. - REUTERS