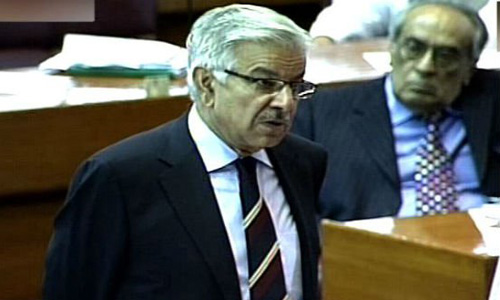 ISLAMABAD (92 News) – Defence Minister Khawaja Asif said that the Yemen will resolve peacefully in a few days as good news are coming from Iran and Turkey. Talking to the media outside Parliament House on Thursday, he said that Pakistan’s image in the United Nations has risen due to efforts for resolving the Yemen issue. He said that the arrival of the Iranian foreign minister to Pakistan is a good omen. “Iran also wants peaceful resolution of the Yemen issue.” The minister said that the step taken by the prime minister after the Turkey tour has been positive. He said that Pakistan is playing the role of a mediator instead of becoming a party. Kh Asif said that the evacuation of all stranded Pakistanis from Yemen has completed.