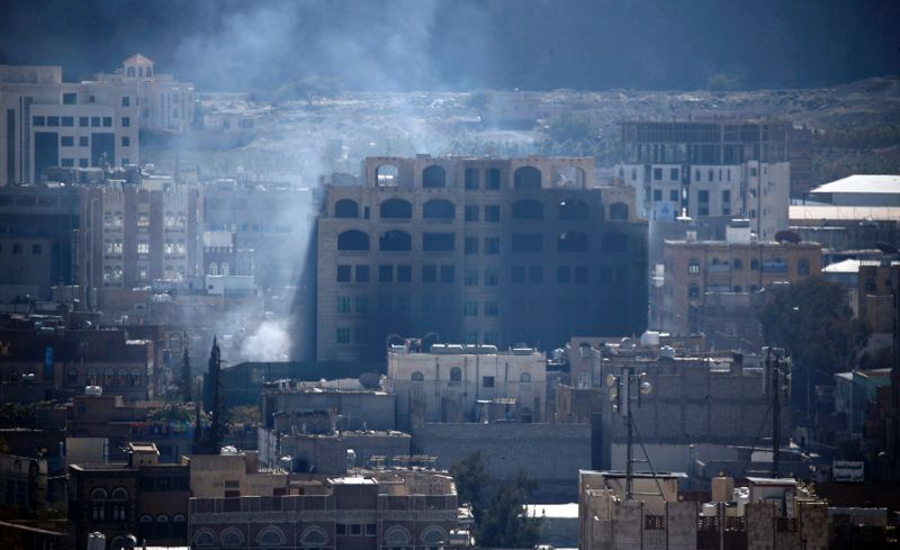 The strikes appeared to hit targets near Sanaa International Airport and the interior ministry, both under the control of the Iran-backed Huthi rebels, according to residents and a source inside the airport.

A military coalition led by Saudi Arabia, Iran's regional arch-rival, is the only party in the Yemen war known to conduct air strikes on Sanaa.

A spokesman for the coalition did not respond to requests for confirmation of the raids on Monday.

Residents near the airport said multiple air raids had shaken their homes late Sunday night and in the early hours of Monday.

An airport source said rebel bases near the location appeared to have been targeted but the airport itself had not been bombed.

Residents also reported that the fighting, which erupted Wednesday night between armed Saleh supporters and Huthi fighters, had spread outside the capital.

The clashes in the capital had killed some 60 people as of Sunday. There was no immediate information available on fresh casualties.

Yemeni territory is split between the forces and government of Abedrabbo Mansour Hadi in the south, backed by Saudi Arabia and recognised by the international community, the northern Huthi rebels and forces loyal to strongman Saleh.

Since 2014, Sanaa has been ruled under an agreement between Saleh and the Huthis, who drove the Hadi government out of the capital, set up their own government and for two years together fought the Saudi-led coalition.

Saleh on Saturday announced he was open to talks with Saudi Arabia and its allies on condition they ended their crippling blockade on Yemen's ports and airports -- dealing a serious blow to his already fragile alliance with rebel chief Abdul Malik al-Huthi.

The Saleh-Huthi split has sparked fears of a new front in the Yemen war, which has already claimed more than 8,750 lives since the Saudi-led coalition joined the war to support the Hadi government.

The conflict has pushed Yemen to the brink of mass starvation and triggered what the United Nations has called the world's worst humanitarian crisis.