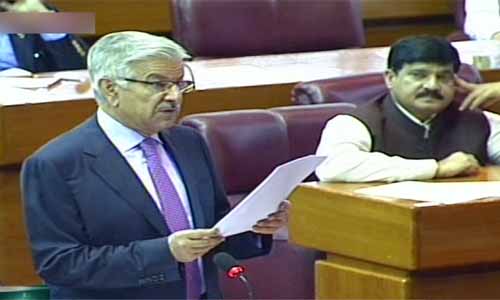 ISLAMABAD (92 News) – The joint session of the parliament over the Yemen situation has been postponed until 5pm after the policy statement by Defence Minister Kh Asif on Monday.

He said that Saudi Arabia has asked Pakistan for military aircraft, warships and soldiers. "We will stand with our Saudi brothers if Saudi Arabia faced any threat to its borders," he said.

The defence minister thanked the Saudi government for extending help in the evacuation of stranded Pakistanis from Yemen. He said that Saudi Arabia is rendering valuable services for the Muslim Ummah.

He said that Saudi Arabia has asked Pakistan for military aircraft, warships and soldiers. “However, parliament will make the final decision in this regard.” Kh Asif said that the Pakistan Army is the only army in world that is fighting against terrorism round the clock. "The world will testify that Pakistan ended terrorism."

He said that Pakistan will fulfil its promise if need arose the defend the border of Saudi Arabia.

Earlier, the session started with the slogans of the PML-N and the MQM members "Go Imran, go Imran."

NA Speaker repeatedly asked the MNAs to stop speaking and chanting slogans, saying that they should not force him to postpone the session.

Opposition Leader in the National Assembly Syed Khurshid Shah said that the treasury’s attitude is condemnable.

He said that the arrival of the PTI MNA is a good omen. "It is a matter of pleasure that the PTI has accepted the parliament."

Khurshid Shah said that they welcome the PTI and it is the victory of democracy.

He called for the presence of Prime Minister Nawaz Sharif in the session.