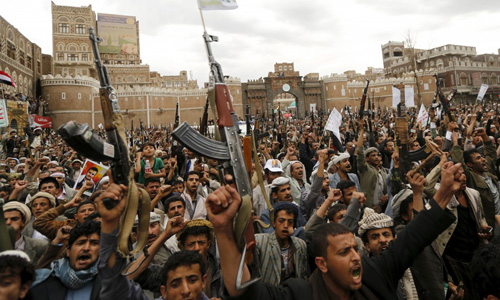 ADEN – Yemen's Shia rebels are open to peace talks if the Saudi-led coalition bombing their positions halts aerial attacks against them, a senior Houthi member said.

Saleh al-Sammad, who was an advisor to President Abd-Rabbu Mansour Hadi, said that if the offer for talks is accepted, negotiations will be mediated by ‘non-aggressive’ parties.

"We still stand by our position on dialogue and we demand its continuation despite everything that has happened, on the basis of respect and acknowledging the other," said al-Sammad, in answers emailed to Reuters.

"We have no conditions except a halt to the aggression and sitting on the dialogue table within a specific time period ... and any international or regional parties that have no aggressive positions towards the Yemeni people can oversee the dialogue," Sammad said, without specifying who they might be.

Al-Sammad also said that Yemenis reject the return of Hadi, who fled to Saudi Arabia after the rebels, known as Houthis, moved closer to his southern base of Aden last month.

Warplanes and ships from a Saudi-led coalition have been bombing the Iran-allied Houthi forces for 11 days in a bid to drive back the Houthis and restore Hadi. UN brokered peace talks in the preceding weeks between Hadi and the Houthis had failed.