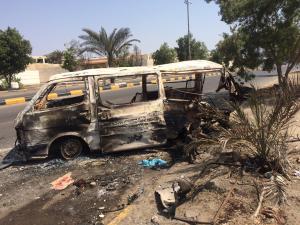 ADEN - Explosions shook the suburbs of the Yemeni port city of Aden on Monday as residents reported a foreign warship shelling Houthi positions on the outskirts of the city. Street fighting and heavy shelling has for several days torn through the city, the last bastion of support for Saudi-backed president Abd-Rabbu Mansour Hadi. Twelve days of bombing by a Saudi-led coalition has failed to halt the advance of the Iran-allied Houthis that has triggered a growing humanitarian crisis for residents in central districts now cut off from the mainland. Relief from outside appeared distant as the International Committee of the Red Cross told Reuters that it had yet to arrange a flight to deliver 48 tons of medical supplies despite gaining Saudi approval for the aid on Saturday night. Food, water and electricity shortages have mounted throughout the country but especially in Aden, where combat has shut ports and cut land routes linking the city to the outside. "How are we supposed to live without water and electricity?" pleaded Fatima, a housewife walking through the city streets with her young children. She clutched a yellow plastic jerry can, like dozens of other residents on the streets and in queues seeking water from public wells or mosque faucets after supplies at home dried up. The International Committee of the Red Cross, which for days blamed the Saudi-led coalition for delays, told Reuters on Monday that Saudi Arabia had granted permission for an aid shipment before midnight on Saturday but problems in chartering planes would likely delay the aid's arrival to the Yemeni capital for at least a day. "We are still working on getting the plane to Sanaa. It's a bit difficult with the logistics because there are not that many companies or cargo planes willing to fly into a conflict zone," said Marie Claire Feghali, a Red Cross spokesperson. "We have very high hopes, given the clearance from the coalition and also the Yemenis, that we will be able to get the 48 tons of medical supplies in tomorrow or the day after," Feghali said. Eight Houthi fighters were killed in an air strike before dawn in the suburbs of the northern city of Saadah, home of the Shi'ite Muslim movement which spread from its mountain stronghold to take over the capital Sanaa six months ago. Local officials said strikes also hit air defense and coastal military units near the Red Sea port of Hodaida, and targets on the outskirts of Aden. They also hit a bridge on the road south to Aden, apparently trying to block the Houthis from sending reinforcements to their fighters in the city. The United Nations said on Thursday that more than 500 people had been killed in two weeks of fighting in Yemen, while the ICRC has appealed for an immediate 24-hour pause in fighting to allow aid into Yemen. - Reuters