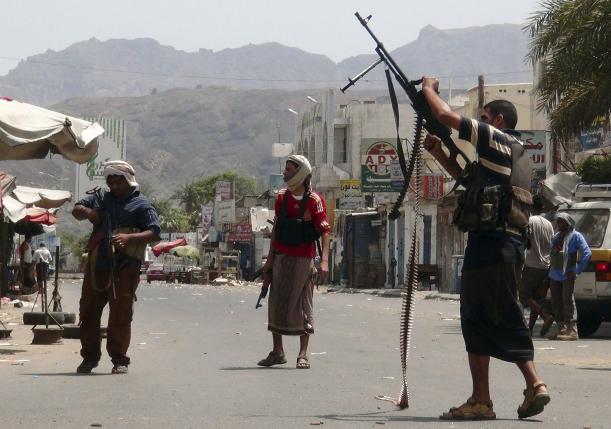 ADEN/RIYADH - Yemeni President Abd-Rabbu Mansour Hadi appointed his former prime minister as vice president on Sunday, a move apparently aimed at improving the chances of a peaceful settlement to the civil war that forced Hadi to flee to Saudi Arabia. "The president issued an order today appointing Khaled Bahah as his deputy," a presidential advisor told Reuters. Bahah is popular across Yemen's spectrum of feuding parties and may be seen as a figure who could calm tensions and bring warring parties to the negotiating table. "The appointment of Bahah may help in finding a political solution as part of efforts to revive the dialogue process sponsored by the United Nations," the Hadi aide told Reuters. There are no signs that the war will let up anytime soon. Saudi Arabia and its Sunni Arab allies have been bombing Yemen for over two weeks, hoping to slow the advance of Iranian-allied Houthi militias towards the southern port city of Aden. Saudi Arabia dismissed Iranian calls to end air strikes and hit a military camp in Taiz on Sunday, killing eight civilians, according to a medical source. The air raids on the central Yemeni city targeted a site held by soldiers loyal to former President Ali Abdullah Saleh who have joined up with Houthi fighters against local militias in the south, the source said. Saleh was forced to give up power in 2012 after mass protests against his rule, but his loyalists in the military remained in place and now fight alongside the Houthis. The conflict has raised fears that a sectarian proxy war between rivals Riyadh and Tehran will further destabilize the Middle East and potentially destroy the Yemeni state. LEGITIMATE "How can Iran call for us to stop the fighting in Yemen?" Saudi Foreign Minister Saud al-Faisal said at a news conference in Riyadh with his French counterpart Laurent Fabius. "We came to Yemen to help the legitimate authority, and Iran is not in charge of Yemen." Iran's Supreme Leader Ayatollah Ali Khamenei said on Thursday that the air strikes were a "crime and genocide" and President Hassan Rouhani called for a ceasefire and dialogue among Yemen's factions. Saudi Arabia and its Sunni Arab allies fear that Shi'ite Iran seeks greater regional influence by backing armed Shi'ite groups in the region, a charge the Islamic Republic denies. Tehran says it has given no military support to the Houthis and on Sunday denied a claim by militiamen in Aden that they had captured two Iranian military officers advising the rebels. "Iran has no kind of military force in Yemen," state news agency IRNA quoted Deputy Foreign Minister Hossein Amir Abdollahian as saying. Suspected militants from al Qaeda, the Sunni militant group that has used the chaos to press its own advantage, killed an army colonel in the central Shabwa province on Sunday, a local official said. Separately, an al Qaeda leader was killed in an apparent US drone strike on a group of militants west of the port city of Mukalla on the Arabian Sea, residents told Reuters. It was the first reported drone strike against the powerful Yemeni branch of the global militant group since the United States evacuated about 100 special forces troops advising Yemeni forces last month. According to the United Nations, the conflict has killed 600 people, wounded 2,200 and displaced 100,000 others since the Houthis seized the capital Sanaa in September. - Reuters