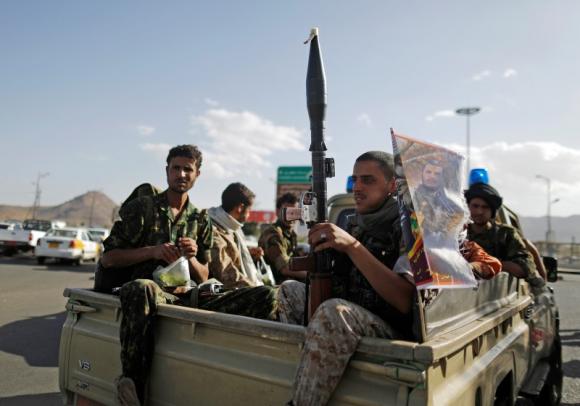 ADEN - Fighters from Yemen's dominant Houthi movement drew closer to President Abd-Rabbu Mansour Hadi's refuge in Aden on Tuesday, taking over two towns north of the port city as columns advanced from different directions. A Houthi official said however that they were not targeting Aden but were defending the country against Islamist militants. The Houthis and allied army units captured Kirsh, a town about 100 km (62 miles) north of Aden, after heavy fighting with forces loyal to Hadi, officials and residents said. Kirsh sits astride a north-south highway and lies about a 40-minute drive to the north of al-Anad airbase, which is still in the hands of Hadi's forces. Other Houthi units overnight entered the Red Sea port of al-Mukha, security officials and residents said. That placed the Iranian-backed Houthis, who seized Yemen's capital Sanaa in September, a short drive from the Bab al-Mandeb strait, a sealane vital to oil shipments. In Taiz province, anti-Houthi protesters and troops clashed in Turba village and nearby Taiz city, which was captured by the Houthis at the weekend. Soldiers opened fire on the protesters, killing at least four and wounding several, medical officials said. Hadi, a former general seen by the Shi'ite Muslim Houthis as a pawn of Sunni Gulf Arab monarchies and the West, has been holed up in Aden since he fled the capital Sanaa in February. His forces have stationed tanks and artillery on a number of roads linking north and south Yemen. An array of tribesmen, militiamen and army units loyal to Hadi are resisting the southward advance of the Houthis and skirmishes have escalated since the weekend. But Houthi official Mohammed al-Bukhaiti told Reuters the fighters were defending Yemen against Islamist militants and not setting their sights on Aden. Bukhaiti also said the movement saw no reason to move peace talks from Yemen to Qatar, but it had not definitively rejected the idea. A Qatari foreign ministry source said earlier Doha would host talks between Yemen's factions. PERENNIALLY CONFLICTIVE The rise of the Houthis has opened a new chapter of instability in Yemen, a perennially conflictive neighbor of oil power Saudi Arabia and a frontline in US efforts to combat Islamist militants waging war across the region and beyond. Their entry into al-Mukha took them to within 80 km (50 miles) north of Bab al-Mandeb strait, which links the Mediterranean Sea and Indian Ocean via the Suez Canal and Red Sea. More than 3.4 million barrels of oil per day passed through Bab el-Mandeb in tankers in 2013, according to the US Energy Information Administration. In the east, Houthi units on Tuesday entered Dhalea town, traditionally a hotbed of southern separatism, and fought gun battles with tribesmen and militias from the southern independence movement, residents said. The Houthis' arrival in Dhalea marked their first inroads into the territory of the formerly independent south. The town has for years been the center of an armed movement to secede from Sanaa. The US ambassador to Yemen, speaking in Washington on Monday, said he believed a political power-sharing agreement between the rival factions was still possible but the United States and its allies need to make decisions quickly. "Political dialogue won't work if Hadi is overrun and captured, and Aden falls, which could happen very quickly," Ambassador Matthew Tueller told Reuters. "All sides recognize that there really isn't any alternative but to reach an agreement on power-sharing," he said. Tueller said Saudi Arabia had offered to host peace talks among the warring Yemeni factions on April 7, but that date was still three weeks away and the situation was eroding quickly. The United States on Saturday evacuated its remaining personnel from Yemen, including about 100 special operations personnel, because of deteriorating security. Yemeni Foreign Minister Riyadh Yaseen appealed on Monday for Gulf Arab military intervention to halt the Houthi advances. Saudi Foreign Minister Saud al-Faisal said the Gulf Arab states would take steps to back Hadi and he accused Iran of trying to sow sectarian strife in the region. - Reuters