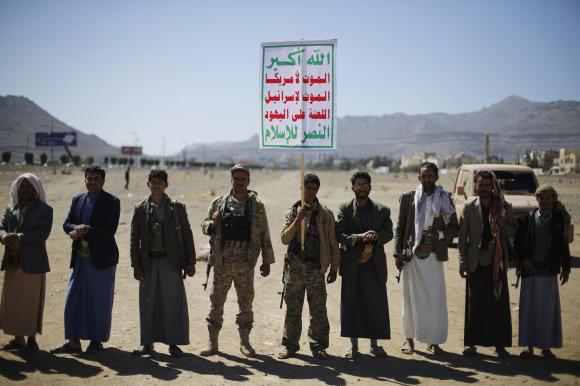 (Reuters) - Yemen's dominant Houthi movement dissolved parliament on Friday and said a new interim assembly and government would be formed, a move denounced by a main political faction as a coup. Yemen has been in political limbo since President Abd-Rabbu Mansour Hadi and the government of Prime Minister Khaled Bahah resigned last month after the Houthis seized the presidential palace and confined the head of state to his residence in a struggle to tighten control. Yemen's instability has drawn international concern as it shares a long border with top world oil exporter Saudi Arabia, and the country is also fighting one of the most formidable branches of al Qaeda with the help of U.S. drone strikes. The Houthis, who became power brokers when they overran Sanaa in September, had been holding talks with the main political factions trying to agree a way out of the stand-off. Friday's declaration suggested that the Houthis had taken on more powers including forming the new parliament and control over the military and security forces. Some political leaders attended the announcement, which took place at the Presidential Palace. Former interior and defense ministers were also there, indicating that the announcement might have had the blessing of some other political factions. But this was unlikely to be tolerated by Saudi Arabia and other Gulf Sunni Arab allies who eye the Shi'ite Houthis with suspicion for being close to their regional rival Iran. The new assembly is to elect a five-member interim presidential council to manage Yemeni affairs in a transitional period of up to two years, according to a televised statement. "What the Houthis have done is political suicide and also a coup that would lead the country into the unknown," said Nasser al-Noubah, a leader of the southern separatist movement al-Hirak. Hundreds of protesters took to the streets in the Yemeni city of Taiz to reject the Houthi takeover, eyewitnesses said. Other main political forces such as the Sunni Islamist Islah party and the Common Front coalition said they were still studying the latest developments and would meet on Saturday to declare their position. The Houthis had set a Wednesday deadline for political factions to agree a way out of the crisis, otherwise the group would impose its own solution. Saudi Arabia has suspended most of its financial aid to Yemen, a clear indication of its dissatisfaction with the growing power of the Houthi.