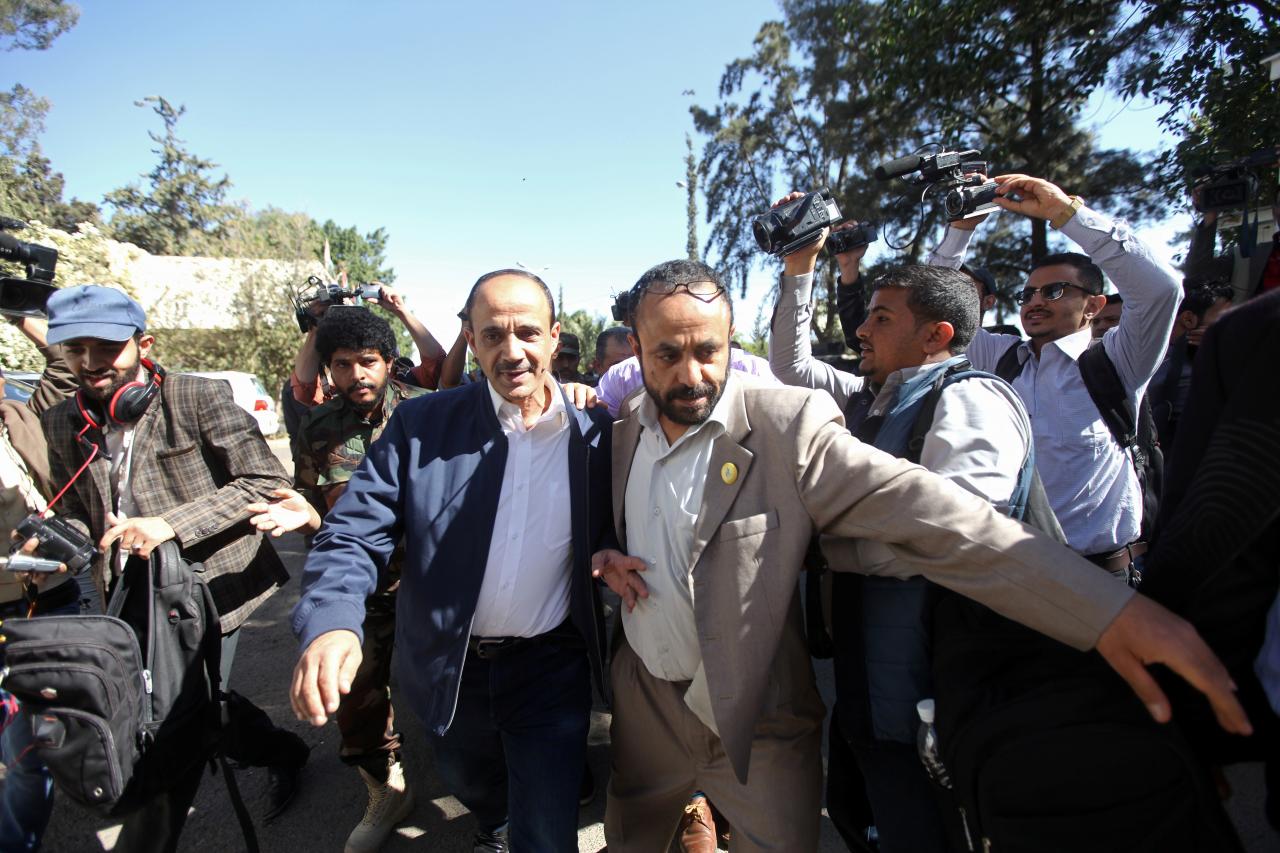 STOCKHOLM (Reuters) - A Houthi delegation arrived in Sweden on Tuesday for UN-sponsored Yemen peace talks, the first since 2016, as Western nations press for an end to the war and the United Nations warned of a looming economic disaster.
A wounded Houthi fighter walks at Sanaa airport during his evacuation from Yemen December 3, 2018.
The nearly four-year-old conflict, which has killed tens of thousands and left millions facing starvation, pits the Iranian-aligned Houthi group against Yemeni forces backed by an Arab coalition loyal to President Abd-Rabbu Mansour Hadi and led by Saudi Arabia and the United Arab Emirates. The Houthi team was escorted from the capital Sanaa, which was seized by the group in 2014, to Sweden by U.N. special envoy Martin Griffiths. Before boarding a Kuwaiti plane, one delegate praised him for delivering on confidence-building measures like the evacuation of wounded fighters and a prisoner swap deal. “Griffiths was true to his word ... We are certain he has put in place a general framework for negotiations in order to proceed with the political process,” Abdelmeguid Hanash told reporters. Hadi’s government is expected to follow the Houthis, whose attendance was secured after the evacuation of 50 wounded Houthis for treatment in Oman on Monday. A previous round in September collapsed when the Houthis failed to appear. The talks will be held in a renovated castle outside Stockholm to discuss further confidence-building steps and a transitional governing body, as the US Senate is set to consider a resolution to end support for the coalition in the war. Outrage over the Oct. 2 murder of Saudi journalist Jamal Khashoggi in the Saudi consulate in Istanbul has intensified international scrutiny of Saudi activities in the region, potentially giving Western powers, which provide arms and intelligence to the coalition, more leverage to demand action. Germany, Denmark and Sweden have suspended arms exports to Saudi Arabia over Khashoggi’s killing and the Yemen war. The United States halted refuelling support for coalition warplanes, whose air strikes have been blamed for many civilian deaths. The Arab alliance intervened in the war in 2015 to restore Hadi’s government, but has bogged down in military stalemate. Residents in the port of Hodeidah, now a focus of the war, were fearful of renewed fighting if the talks failed as each side fortified their positions in the Houthi-held Red Sea city after a period of reduced hostilities. “The situation here does not make us optimistic that we will avoid war,” said 51-year-old government employee Mohammed Taher.

The conflict, seen as a proxy war between Riyadh and Tehran, has left over 8 million Yemenis facing famine although the United Nations has warned this could rise to 14 million. Three-quarters of the population, or 22 million, rely on aid. World Food Programme chief David Beasley said in Geneva that an upcoming food security report would show an increase in severe hunger rates in Yemen - where a child dies every 11 minutes - but not necessarily meet the criteria of famine. U.N. humanitarian chief Mark Lowcock said Yemen’s government will need billions of dollars in external support to fund core state functions, its 2019 budget and to avoid another currency collapse, in addition to $4 billion in aid. UAE Minister of State for Foreign Affairs Anwar Gargash said on Tuesday that the Sweden talks are a “critical opportunity”. “A sustainable Yemeni-led political solution offers the best chance to ending the current crisis. A stable state, important for the region, cannot coexist with unlawful militias.” The talks, which will focus on reopening Sanaa airport, implementing a prisoner swap and securing a truce in Hodeidah, the entry point for most of Yemen’s commercial goods and aid. This would serve as a foundation for a wider ceasefire that would halt coalition air strikes and Houthi missile attacks on Saudi cities. The last available UN figure for the civilian death toll was in 2016 and stood at more than 10,000. The Armed Conflict Location & Event Data Project, which tracks violence in Yemen, puts it at around 57,000 people.