Youm-e-Ashur being observed with religious fervour across country 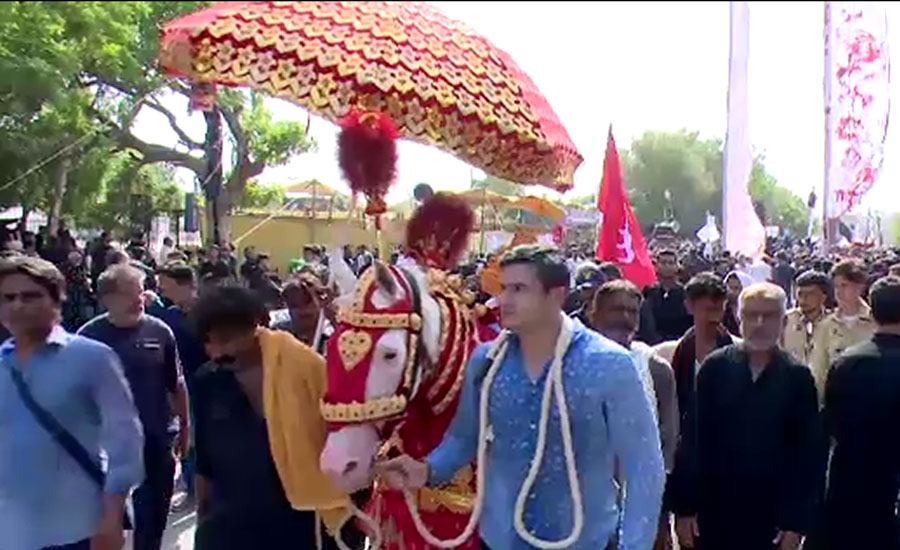 Youm-e-Ashur being observed with religious fervour across country

ISLAMABAD (92 News) – Youm-e-Ashur, in remembrance of the martyrs of Kerbala, is being observed with religious fervour across the country on Tuesday. It is pertinent to mention here that in the 10th of Muharram, Youm-e-Ashur, Muslims observes this day with due solemnity to pay homage to the supreme sacrifice rendered by Hazrat Imam Hussain Razi Allah ho Ta'ala Anho and his devoted companions in Karbala. The Zuljinah processions concluded at their designated places after passing through traditional routes in Islamabad, Lahore, Karachi and Quetta. Taazia and Zuljanah processions will be taken out in all cities and towns of the country including Islamabad, Lahore, Karachi and Quetta. Ulema and Zakireen will highlight the bright and candid teachings of Hazrat Imam Hussain (RA) and various aspects of Karbala tragedy. Water tanks, milk and soft drinks (Sabeel) is being arranged across the routes of the processions. Before the processions, the mourners will address by their religious scholars. Meanwhile, elaborate arrangements have been made to ensure security of mourning processions and Majalis. Police and other law enforcement agencies will be deployed to ensure law and order.

In Lahore, processions of 10th Muharram will be taken out from different parts of the city. The main process of 10th Muharram is being taken out from Nisar Haveli, inside Mochi Gate, which concluded at Karbala Gaamay Shah, after passing through its traditional route inside the Lahore Walled City. Thousands of police personnel and other law enforcement departments will be deputed on the routes of all processions to avoid any untoward incident, while CCTV cameras had been installed on the routes of processions, especially the main processions. Meanwhile, a Monitoring Cell is also functional at IG Office Lahore to monitor the processions.

In Peshawar, the main Alam and Zuljinah procession of 10th Muharram is being taken out from Imambargah Alamdar-e Karbala Qissa Khawani Bazaar after Zohar prayers. Over 10 processions will be taken out from other Imambargahs which joined the main procession. The processions after passing through its traditional routes will be terminated at its starting point in the evening. Tight security measures have been taken to ensure peaceful atmosphere on the occasion of Youm-e-Ashur. Similarly, processions will be taken out in different parts of the province. About 31,000 personnel of police, Levies and law enforcing agencies were deployed in different parts of the province.

Youm-e-Ashur is being also observed in Gilgit-Baltistan. To pay reverence to supreme sacrifices rendered by Hazrat Imam Hussain (RA) and his companions in Karbala, processions have been organized in all three divisions. In Gilgit, the main Ashur procession will be started from Jamia Imamia Mosque at 8am which passing through traditional route culminated at the same place at 4:30pm. The Gilgit-Baltistan administration have made security plan to ensure protection of mourners during Ashur processions.