Youm-e-Ashur observed with due solemnity across Pakistan 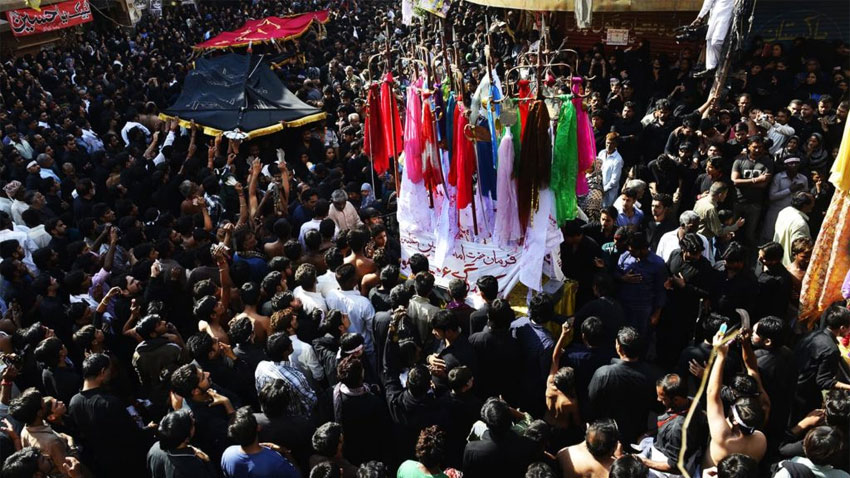 Youm-e-Ashur observed with due solemnity across Pakistan

ISLAMABAD (92 News) - Youm-e-Ashur - the 10th Muharramul Harram - observed on Sunday across Pakistan with due solemnity to pay homage to the supreme sacrifice rendered by Hazrat Imam Hussain Razi Allah Ta'ala Anho and his devoted companions in Karbala. The mourning processions were taken out in all the cities and towns of the country. Standard Operating Procedures (SOPs) have also been followed for the mourning processions after consultations with the religious scholars to avoid spread of Covid-19. Ulema and Zakireen highlighted the bright and candid teachings of Hazrat Imam Hussain (R.A.) and various aspects of Karbla tragedy. Elaborate security arrangements have been made to avoid any untoward incident during the mourning processions.

In Rawalpindi, the central procession of Ashura emerged from Imambargah Col Maqbool Hussain and ended its culmination point at Imambargah Qadeemi after passing through its designated route. The mourners held Sham-e-Ghariban Majlis at Imambargah Qadeemi. Sabeels of water, milk and tea have also been set up along the route of the procession in remembrance of famine like situation faced by Hazrat Imam Hussain Razi Allah Ta'ala Anho and his companions. Strict security measures were in place to ensure peace and security. Walk-through gates and CCTV cameras installed to check the entry and exit of people at various points.

In Lahore, main Shabih-e-Zuljinah procession of 10th Muharramul Haram, taken out from Nisar Haveli inside Mochi Gate of Old Walled City passed through its traditional route and culminated at Karbala Gaamay Shah this evening, where Sham-e-Ghareeban was held.

In Peshawar, the main Alam, Tazia and Zul jinnah procession were being taken out from Imam Bargah Agha Syed Ali shah Qissa Khawani Bazaar. Fourteen other processions were taken from different Imambargahs which joined the main procession. The procession after passing through its traditional routes terminated at its starting point in the evening. Similar processions of Tazia, Alam and Zuljinah were also be taken out in Mardan, Kohat, Bannu, Hangu, Lakki Marwat, Kurram and Dera Ismail Khan districts. Tight security measures have been taken to ensure peaceful atmosphere on the occasion of Yaum-e-Ashur.

In Quetta, the main mourning procession comprised of Alam, Tazia and Zuljinah has been taken out from Nichari Imambargah at Alamdar Road. The main procession culminated at Alamdar Road in the evening after passing through its conventional route.