ISLAMABAD (92 News) – Youm-e-Ashur, in remembrance of the great martyrdom of Hazrat Imam Hussian (RA), was observed with religious reverence and fervour across the country on Tuesday. Tazia and Zuljinah processions concluded at their designated places after passing through traditional routes in Islamabad, Lahore, Karachi, Quetta, Multan, Rawalpindi, Sukkur, Quetta, Dera Ismail Khan, Jhang, Bhakkar and other cities. Mourners beat their chests and performed self-flagellation. Later, Sham-e-Ghareeban was held.

Zakireen highlighted the candid teachings of Hazrat Imam Hussain (RA) and various aspects of the Karbala tragedy. Water tanks, milk and soft drinks points (Sabeel) were set up along the routes of the processions. 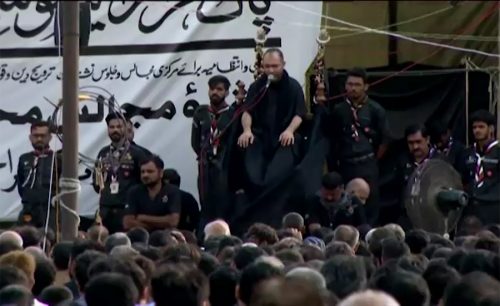 Meanwhile, elaborate arrangements were made to ensure security of mourning processions and Majalis. Police and other law enforcement agencies were deployed to ensure law and order. 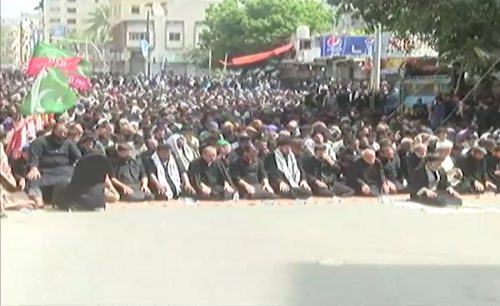 PUNJAB In Rawalpindi, the central procession of Ashura emerged from Imambargah Col Maqbool Hussain, which culminated at Imambargah Qadeemi after passing through its designated route. Zakireen highlighted the philosophy of the battle of Karbala, paying great respects to the grandson of Prophet Hazrat Muhammad (PBUH). The mourners held Sham-e-Ghariban at Imambargah Qadeemi. Strict security measures were in place to ensure peace and security. Walkthrough gates and CCTV cameras had also been installed to check the entry and exit of people at various points. The Metro bus service remained closed on Tuesday in view of security measures regarding Youm-e-Ashur. Meanwhile, in Lahore, main Shabeeh e Zuljinah procession of 10th Muharramul Haram was taken out from Nisar Haveli inside Mochi Gate of Old Walled City near midnight last night. It concluded at Karbala Gaamay Shah this evening, where Shaam-e-Ghariban was held. SINDH In Karachi, the main procession was taken out from Nishtar Park which after passing through Peoples Chowrangi, Sadr Dawa Khana and Bolten Market culminated at the Imambargah Hussenian Iraniana Kharadar. Strict security measures were made on the occasion. In Hyderabad, the main procession began from Qadam Gah Mola Ali Gari Khata area of Hyderabad which culminated at Karbala Dadan Shah where a Sham-e-Ghareeban was also held. KHYBER PAKTUNKHAWA In Peshawar, the main Alam and Zuljinnah procession was taken out from Imambargah Agha Syed Ali Shah Qissa Khawani Bazaar this morning. Fourteen other processions were taken out from different Imambargahs which joined the main procession. The procession after passing through its traditional routes terminated at its starting point in the evening peacefully. Similar processions of Tazia and Zuljinah were also taken out in Hangu, Parachinar, Kohat, Bannu and Dera Ismail Khan. Strict security arrangements were taken to ensure peaceful atmosphere on the occasion of Youm-e-Ashur. Over 18,000 personnel of police and other law enforcing agencies were deployed in different parts of the province to ensure peaceful atmosphere on the occasion. Aerial surveillance of the procession routes was also carried out. Mobile service remained suspended in Peshawar city to avoid any untoward incident. QUETTA The main mourning procession of Alam, Tazia and Zuljinah was taken out from Punjabi Imambargah Marriabad in Quetta city which after passing through its traditional route concluded at this the same place after Maghrib prayers. Sham-e-Gareeban was held at each Imambargah during which the philosophy of martyrdom embraced by Hazrat Imam Hussain (RA) and his companions was highlighted.