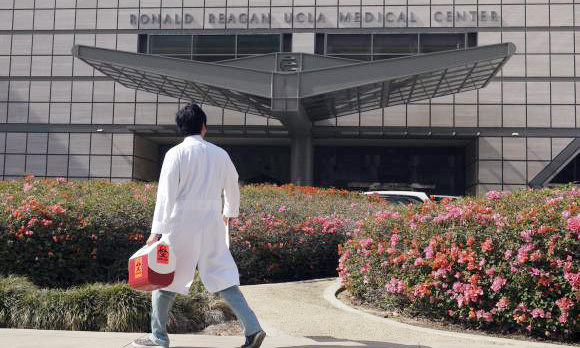 LOS ANGELES (Reuters) - An 18-year-old man who was one of seven patients infected with a drug-resistant bacterial "superbug" during a medical procedure in Los Angeles was under 24-hour monitoring at a hospital as he fought a severe infection, his attorney said on Friday. Infection by the carbapenem-resistant enterobacteria, or CRE, during endoscopies at a large teaching hospital in the University of California at Los Angeles system has contributed to two deaths among the seven patients. Officials warned that as many as 179 people who had endoscopies at the UCLA Ronald Reagan Medical Center may have been exposed to the so-called superbug. The procedures were done between Oct. 3 and Jan. 28. All five of the confirmed infected patients who remain alive are under treatment, said UCLA spokeswoman Dale Tate. The infections all occurred during procedures in which a specialized scope, known as a duodenoscope, was inserted down the throat to diagnose and treat pancreatic and bile duct diseases. The outbreak has raised questions about whether methods for cleaning the endoscopes were adequate. The 18-year-old man, whose name has not been released, was among those infected by CRE, said attorney Kevin Boyle, a member of his legal team. The man went to the medical center in mid-2014 for a pancreatic ailment and received an endoscopy, Boyle said. The man became ill and was hospitalized a short time later. By November, he had been diagnosed with CRE. The youth spent 83 days in the hospital, mostly in the intensive care unit, the attorney said. "It's definitely a severe infection," he said, adding that the infection had landed the young man back in a Los Angeles hospital. The 18-year-old was not in the intensive care unit but was under 24-hour monitoring. "The (man's) prognosis is unknown," Boyle said. He would not give the name of the hospital where the young man is being treated. Further details on the conditions of the five infected patients have not been disclosed, and details on the circumstances of the two deaths have not been made public. Officials have said there is no broader threat to public health, and that hospital officials have called and sent letters to at-risk former patients. All of them are at home, rather than at a hospital, Tate said. No further infections have been reported. Corey Egel, a spokesperson for the California Department of Public Health, said the short-term risk window for additional CRE infections among the patients who came into contact with the scopes was over. There remains, however, a possibility of future infections if the organism was able to colonize inside any of the patients. "Any person who is colonized with any multi-drug resistant organism is at some increased risk in the future of developing an infection with that organism," he said. The medical center has said that it had been sterilizing the duodenoscopes implicated in the infection, which it began using in June, according to manufacturer standards. It has said it now uses a more rigorous process that exceeds national standards. The two infected scopes were immediately removed from use for return to the manufacturer, Olympus Medical Systems Group. Olympus did not immediately respond to requests for comment. Hospitals across the United States have reported exposures from the same type of medical equipment in recent years. The U.S. Food and Drug Administration has said it was working with other government agencies and scope manufacturers to minimize risks to patients. California's public health department said no other hospitals in the state have seen a similar outbreak.