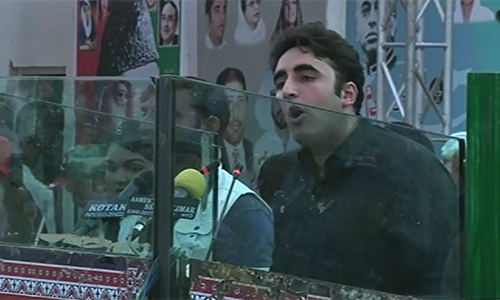 LARKANA (92 News) – PPP chairman Bilawal Bhutto Zardari has said that Zulfikar Ali Bhutto had introduced land reforms to end the feudalistic system. Addressing a gathering on the 37th death anniversary of ZAB on Monday, he said that ZAB had given the country the constitution. “Pakistan is bright through the blood of the martyrs. Allah Almighty is about to expose the cruel,” he said. “Why was my maternal grandfather hanged on the court order? Why were my two maternal uncles deprived of the right to live? Why was my mother murdered in broad daylight? Why was my father imprisoned? What was our fault?” he questioned. He said that the murder of Bhutto was not the murder of a human being, but the murder of poor people, the constitution and democracy. “We are still paying the price for that murder,” he said. The PPP chairman questioned why the person who violated the constitution twice was allowed to leave the country. He said that the country had taken the Rs 4 trillion loan during the last three years. “Mian Sahib says that they will break the begging bowl and will not seek charity. The loan taken during the last three years is much more than the 60-year history of the country. The poor wants bread, but he is shown the ‘Jangla Bus’. He seeks healthcare, but he is shown the Orange Line. The money of the entire country has been spent on a few parts of a province,” he said.