ISLAMABAD (92 News) – Pakistan Peoples’ Party (PPP) Chairman Bilawal Bhutto Zardari and Co-Chairman Asif Ali Zardari visited Jati Umra to offer condolence with former prime minister Nawaz Sharif on demise of Begum Kulsoom Nawaz. Zardari and Bilawal were accompanied by a PPP delegation including Rehman Malik, Qamar Zaman Qaira and Azizur Rehman Chan during their visit to Jati Umrah. In the meeting, the PPP leaders expressed profound grief over the former first lady’s passing. Zardari spoke about Begum Kulsoom’s bravery when Nawaz was imprisoned during General Pervez Musharraf’s tenure. Shehbaz Sharif also accompanied his brother, as did Ayaz Sadiq, Hamza Shahbaz and Captain (r) Safdar. Former prime minister Nawaz said that he is most aggrieved over not being with Kulsoom in her last hours.

On the other hand, Pakistan Muslim League-Q leaders Ch Shujat Hussain and Moonis Elahi also visited Jati Umra and met with Nawaz Sharif. In the meeting, both the PML-Q leaders extended condolence with Nawaz Sharif on death of Begum Kulsoom Nawaz. 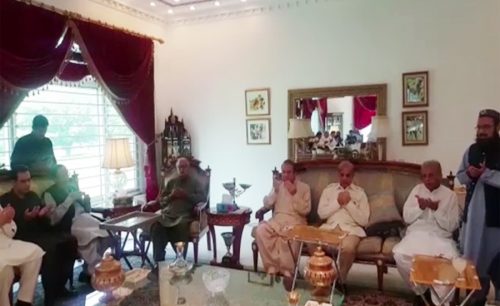 Begum Kulsoom passed away on September 11 in London after a prolonged battle with cancer. She was buried on September 14 in Jati Umra and her funeral prayers were attended by thousands. Nawaz Sharif, his daughter Maryam Nawaz and son-in-law Captain Safdar is currently on parole and will return to Adiala Jail when his parole ends on September 17 at 4pm.