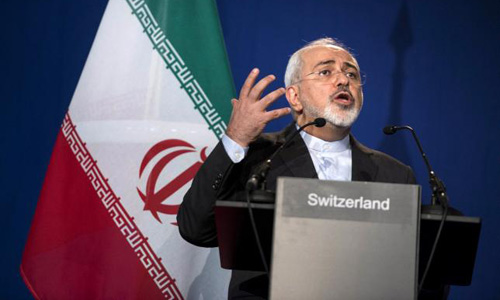 DUBAI/BEIRUT - All United Nations Security Council resolutions related to Iran's nuclear program will be lifted immediately if a final deal is agreed, Foreign Minister Mohammad Javad Zarif said on Saturday, stressing the benefits to Iran of this week's negotiations. After leading Iranian negotiators to a preliminary deal with world powers in Switzerland, Zarif must now convince a domestic audience that the talks are heading toward a final deal that is in Iran's interest. He disputed a "fact sheet" released by the United States shortly after the deal that emphasized Iranian concessions and referred to sanctions being suspended rather than lifted and only after confirmation that Tehran has complied with the terms of the agreement. "The Americans put what they wanted in the fact sheet... I even protested this issue with (U.S. Secretary of State John) Kerry himself," he said in a television interview cited by the Fars news agency, adding that U.N. Security Council would oversee any deal. "Either side in this agreement can, in the case of the other side violating the agreement, cease its own steps," Zarif said. He mirrored earlier comments by U.S. President Barack Obama that sanctions could be reapplied if Iran did not stick to its word. "Whatever work we have on the nuclear program can be restored... Our knowledge is local and no one can take that away from us," he added. Iran's lead negotiator, who was welcomed back to Tehran by cheering crowds on Friday, insisted that Iran had negotiated from a position of strength to secure a good preliminary deal. He pointed to the changes in the demands of the P5+1 group of countries - the United States, France, Britain, Germany, Russia and China - as evidence of the success of negotiations that began two years ago. "They realized they can't shut down Iran's nuclear program." Zarif said Iran would keep its promises so long as the West also did so, and suggested a deal could open the door to more productive relations with the international community, echoing comments on Friday by President Hassan Rouhani. "We don't want anything more than our rights," he said. "We've never pursued a bomb in the past or now. We're also not looking for regional hegemony. We want good relations with our neighbors in the region." U.S. officials have insisted that a detailed list of specific items agreed at the Lausanne talks, which the U.S. side released on Thursday, was not open to further negotiation and would be part of the final overall agreement to be worked out by end-June. A senior U.S. official told reporters on Friday that Iran and the six nations had agreed they could release their own interpretations of the deal, but there were not to be any discrepancies about facts. "We understood we would have different narratives, but we wouldn’t contradict each other," the official said. The U.S. fact sheet described its contents as "the key parameters" of a final deal to be agreed by June 30. It said key details were subject to further negotiation, adding that "nothing is agreed until everything is agreed." Separately, France has released its own fact sheet on the nuclear deal, which includes additional detail about the easing of limitations on Iran's enrichment program after 10 years. While it does not contradict the U.S. fact sheet, it notes that Tehran would eventually be able to use advanced centrifuges. The French fact sheet said Tehran would be allowed a "gradual and precisely defined increase in (enrichment) capacity between the tenth and thirteenth years with the introduction of advanced IR-2 and IR-4 centrifuges." The fact that under a final deal Tehran would eventually be permitted to use advanced centrifuges that purify uranium several times more efficiently than the first generation IR-1 machines Iran currently uses is likely to raise concerns in Israel and Republican-dominated U.S. Congress. Under the Lausanne agreement, Tehran would only use IR-1s for the first decade. - REUTERS