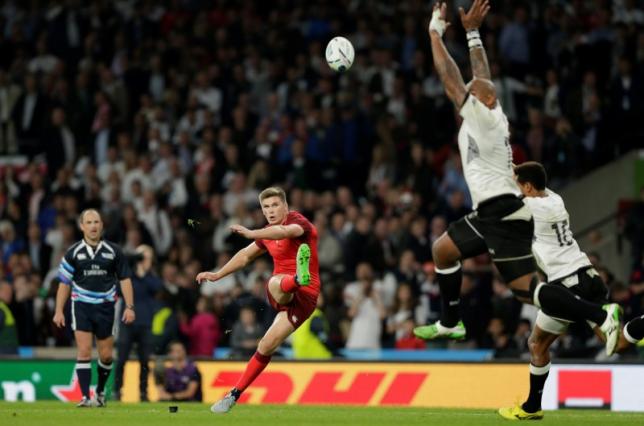 LONDON - The constant stop-start interruptions while referees review TV footage could undermine England's challenge for the Rugby World Cup, according to flyhalf Owen Farrell. The Television Match Official, more commonly referred to as the TMO, featured heavily during England's victory over Fiji in Friday's tournament opener, with decision referrals accounting for 10 percent of the game's duration. Though the use of video evidence undoubtedly helps referees to make the correct call, the breaks also allow teams to regroup and recover -- respite that foils England's central ploy of wearing down opponents with the pace and intensity of their play. England coach Stuart Lancaster was diplomatic after his team emerged 35-11 victors from a contest peppered with delays. "We want to see accurate decisions, so we just get on with it," he said, refusing to be drawn into a debate that vexed many a fan and commentator after the hosts' scratchy win. Flyhalf Farrell, however, was more forthright once the dust had settled. "There was a lot of ball out of play time, so we didn't really get going as a team, which I thought was tough," he said. "We want to keep the ball in play for as long as we can, we want to play rugby, we want to make the decisions, we want to keep it in-field as much as we can." Certainly other teams are hoping referees will be more judicious in consulting the TMO as the tournament progresses. The crowd in Cardiff for Ireland's win over Canada made their feelings plain, whistling the use of the video referee, and Ireland coach Joe Schmidt said he hoped its use would be "kept in context". "For foul play and deciding tries it has proven its worth, but hopefully games will survive on their own merits and it won't need to be used so often," Schmidt said. "And hopefully the game will keep going as well because there's nothing worse than players having long, disruptive periods." Georgia coach Milton Haig, meanwhile, fears that the breaks could hinder the sport's attempt to accelerate the growth of its global audience. "I think you will find that it is probably going to impact on people viewing the game," he said. "We don't want to turn into American gridiron, that's for sure. "I suppose it is just a necessary evil. I understand where World Rugby are coming from, trying to make sure they make the right decisions." -Reuters