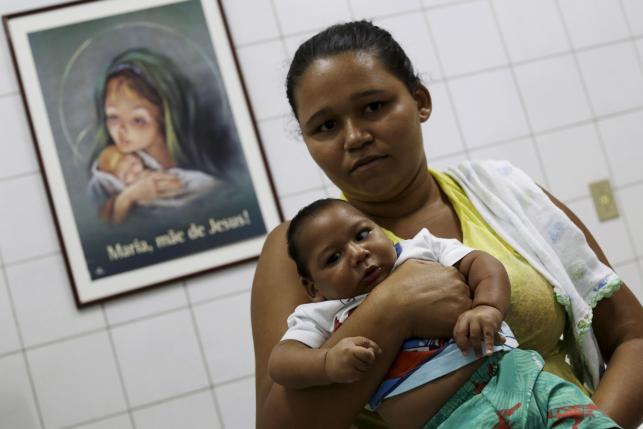 RECIFE - For scores of women in the epicenter of the Zika outbreak in Brazil, the joy of pregnancy has given way to fear.

In the sprawling coastal city of Recife, panic has struck maternity wards since Zika - a mosquito-borne virus first detected in the Americas last year - was linked to wave of brain damage in newborns. There is no vaccine or known cure for the poorly understood disease.

In about four-fifths of cases, Zika causes no noticeable symptoms so women have no idea if they contracted it during pregnancy. Test kits for the virus are only effective in the first week of infection and only available at private clinics at a cost of 900 reais, more than the monthly minimum wage.

At Recife's IMIP hospital, dozens of soon-to-be mothers wait anxiously for ultrasound scans that will indicate whether the child they are carrying has a shrunken head and damaged brain, a condition called microcephaly. The hospital has already had 160 babies born there with the deformity since August.

"It's very frightening. I'm worried my daughter will have microcephaly," says Elisangela Barros, 40, shedding a tear behind her thick-rimmed glasses. "My neighborhood is poor and full of mosquitoes, trash and has no running water. Five of my neighbors have Zika."

Women like Barros, who live in crowded, muddy slums of Brazil's chaotic cities, have little defense against the Aedes aegypti mosquito that carries Zika, as well as other diseases such as dengue and yellow fever. They often cannot afford insect repellent and have little access to family planning.

Shocking images of babies with birth defects have made many women think twice about getting pregnant.

Doctors worry the outbreak will lead to an increase in dangerous clandestine abortions in the majority-Catholic country. Under Brazilian law, terminating pregnancies is illegal except in cases of rape and when the mothers' life is at risk.

The rapid spread of Zika to 22 countries in the Americas has prompted some governments to advise women to delay having children. El Salvador recommended women not get pregnant for two years.

It has also triggered debate on liberalizing abortion in the region, where many countries have strict laws.

"Fear is growing among women because this is a new disease that we know little about. We don't have many answers," said Adriana Scavuzzi, a gynecologist at the IMIP hospital.

Brazil's health ministry said as of Jan. 23 there were 270 confirmed cases of microcephaly and a further 3,448 suspected cases since October are being investigated -- by far the most in the Americas.

World Health Organization officials say there is no scientific proof that Zika stunts the development of the fetus, causing microcephaly, but it is strongly suspected.

Ninety percent of children born with the condition will have retarded mental and physical development, and will need specialized care for the rest of their lives. There is no certainty what they will be able to see or hear, or when they will learn to walk and talk, Scavuzzi said.

Scavuzzi compared the emergency to the Thalidomide tragedy of the 1960s when thousands of children, mostly in Europe, were born with deformed limbs due to the use of the pill to help pregnant women with insomnia and morning sickness.

"It will be worse than the Thalidomide generation because then the cause could be withdrawn from the market," she said. "But how do you withdraw from circulation a mosquito that has lived with us for so long?"

Zika, first identified in Uganda in 1947 and unknown in the Americas until discovered in Brazil last year, causes a mild fever and body aches, symptoms that disappear in five days and can be mistaken for dengue, a virus that infected 1.6 million Brazilians last year.

With a health crisis on its hands, Brazil's government says women who want to get pregnant should discuss the risks with their doctors but has stopped short of telling them to delay.

Instead, it plans to hand out insect repellent to tens of thousands of low-income pregnant women and is stepping up an offensive to eradicate the mosquito with the help of the army.

Public health experts expect Zika will lead to an increase in illegal abortions. An estimated 1 million are already carried out every year in Brazil.

Botched procedures in clandestine clinics using sharp tools, over-the-counter medicines and no sterilization are already a major cause of maternal deaths.

"Zika is a health catastrophe and a terrifying menace for pregnant women," said Daniel Becker, a pediatrician and public health expert in Rio de Janeiro. "People will look for an abortion."

Women's rights organizations are advocating legal abortion in the case of women who contract Zika, a move that so far has been only taken by Colombia's health ministry.

In Brazil, a group of researchers, activists and lawyers plans to petition the Supreme Court to allow abortions for women who have the virus, by-passing an increasingly conservative Congress where Evangelical lawmakers are backing a bill to restrict abortion even in cases of rape.

The same group won a ruling in 2012 to extend legal abortion to anencephaly, a defect in which the baby is born without parts of the skull and brain and almost always dies shortly after.

With Brazil's health care system already over-stretched, the future for many mothers could be grim if the Supreme Court does not act, said Debora Diniz, a law professor leading the campaign. "We will soon have a generation of poor women whose destiny will be to look after extremely dependent children full-time," she said. -Reuters