Zimbabwe in negotiations for May tour of Pakistan 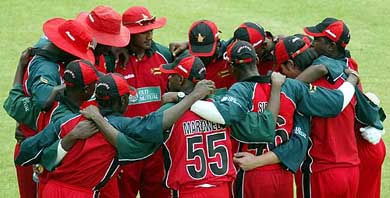 Zimbabwe in negotiations for May tour of Pakistan

KARACHI (Reuters) - The Pakistan Cricket Board (PCB) is in negotiations with Zimbabwe after the African side expressed an interest in touring Pakistan later this year. "I have met with the chief executive of the Zimbabwe cricket union and we discussed the revival of international cricket in Pakistan," team manager Naved Akram Cheema told reporters in Adelaide on Thursday. "He told me they were interested in a reciprocal series with Zimbabwe wanting to send a team in May." No test side has toured Pakistan since March, 2009 when militants attacked the Sri Lankan team in Lahore. Six Pakistani policemen were killed and some of the visiting players were wounded. Cheema, who has served as chief secretary of the Punjab province, said it would not be a mistake to invite any team to play in Pakistan and that the security situation was now much better. "Things are under control and I don't think we will have any security situation which can cause us embarrassment if teams are invited to Pakistan," he said. Non-test-playing Kenya played five one-day internationals in Lahore last year. Cheema said it was unfortunate that the Pakistani people, who are passionate about cricket, were being deprived of a chance to watch international teams.