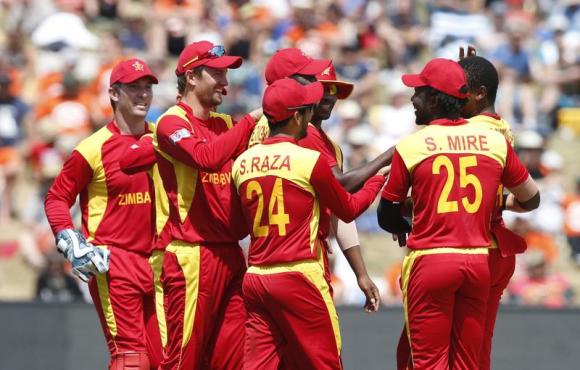 NELSON (Reuters) - Almost two decades have passed since the glory days of Zimbabwe cricket and while the current crop of players lack the class of their predecessors, a promising start to their World Cup campaign will raise hopes of a quarter-final berth. Zimbabwe struggled after being granted test status in 1992 but had emerged as a force by the end of the decade with batsmen Grant and Andy Flower, David Houghton and all-rounders Heath Streak, Paul Strang and Andy Blignaut driving them forward. In one-day cricket, the high point came with a fifth-place finish at the 1999 World Cup, missing out on a semi-final berth due to an inferior run rate, before the early stages of decline set in at the turn of the millennium. The politicisation of the sport, including selection policy, hampered the side's progress and an exodus of leading players along with a suspension of test matches sent the team into a downward spiral that it is still struggling to arrest. Currently 10th in the ODI rankings, Zimbabwe slumped to a 5-0 defeat in a one-day series in Bangladesh towards the end of last year and arrived for the tournament being co-hosted by New Zealand and Australia short of form and victories. However, the appointment of 1996 World Cup-winning coach Dav Whatmore and a morale-boosting warm-up win over Sri Lanka lifted spirits within the camp and the positive momentum was carried forward to their opening two fixtures. "I got a sense of genuineness to turn things around, especially from the players," Whatmore, who guided Sri Lanka to victory 19 years ago, said prior to the tournament. "I am always an optimist but I am going in with my eyes wide open. They can play and they are tough enough. They're just looking for more of what they need to perform." BELATED DEBUT For Zimbabwe to have any hope of advancing from the pool phase, key contributions were needed from experienced batsmen Brendan Taylor, Hamilton Masakadza and Craig Ervine as well as all-rounder Sean Williams and skipper Elton Chigumbura. All have played a part so far as the Zimbabweans pushed South Africa hard before succumbing to a late collapse but followed that up with an accomplished chase of a challenging total against UAE in their second match. Masakadza, making his World Cup debut almost 14 years after his first test as a 17-year-old, scored a blistering 80 against the Proteas, while Taylor and Ervine shone in key partnerships with Williams (76 not out) as Zimbabwe overhauled UAE with two overs to spare. The turnaround in form does not come as a surprise to Chigumbura, who felt the conditions in the disappointing tour of Bangladesh did not suit a side he knew were set up to play better New Zealand and Australian pitches. "They are good wickets here. They don't turn much. Our focus since we came here, we have been playing good cricket, so we just need to carry on the way we are doing and try and forget about the negative that happened in Bangladesh," he said. Zimbabwe will go into their next match against a ragged West Indies side full of confidence and a victory in that fixture will set up a March 7 showdown against an in-form Ireland with a likely quarter-final berth on offer to the winners. "We need to take this momentum into the game against the West Indies," Chigumbura said. "Hopefully we can polish up our fielding and have a good game in all departments."