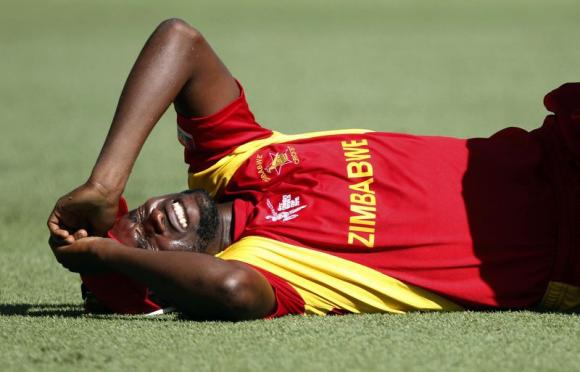 HOBART - Zimbabwe are convinced their clash with Ireland in Hobart on Saturday is the "crunch" game of their World Cup campaign. The Africans have won just one of their four games and are sixth in Pool B, but victory against William Porterfield's side will put them back in the hunt for a quarter-final place. "It's a crunch game for us, and it is for them too," Zimbabwe wicketkeeper Brendan Taylor told reporters on Friday. "We certainly targeted this game. We're not taking them lightly. They're a quality side when the game gets going. So we need to win this and try to push for India as well. But we're just not looking too far ahead. We're just focused on tomorrow, and hopefully the result will take care of itself." An out-of-sorts Pakistan are in fourth on the table on four points, the same as Ireland, but face a fired-up South African side in Auckland also on Saturday and could be struggling if they lose that match. Pakistan face Ireland on March 15 in Adelaide, so the match at Bellerive has ramifications for all three sides heading into the final week of pool play. "Every game is pressure. If you are in a World Cup, you want to win everything. You want to be competitive at least," Taylor said. "But I think there is always pressure. I think they're going to feel a lot of pressure. They also need to win this game." Zimbabwe's performances have been mostly productive, though they have not been able to get over the line when in a position of strength. They let South Africa off the hook in their opening game when David Miller and JP Duminy put on a 256-run partnership to drive them past 300. Pakistan also were pushed all the way before Zimbabwe fell 20 runs short of the victory target. Taylor, who will replace injured captain Elton Chigumbura after the all-rounder tore his quadricep muscle while fielding against Pakistan, said their failure to convert opportunities had been discussed at length this week. "We've been playing some good cricket," Taylor said. "Eighty percent of the games we've been playing winning cricket and probably just letting it slip that other 20 percent. "So if we can just sort of narrow that gap a bit, we're going to be a lot more consistent and get over the line more often. We know we need to win this game. There are no grey areas there. We need a good performance."– Reuters