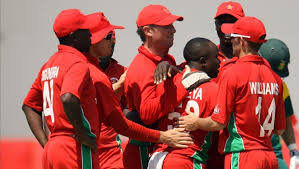 HAMILTON (Reuters) - The days have long passed when Zimbabwe were just happy to be at the World Cup. This year, the Africans are making their ninth straight appearance at cricket's greatest spectacle. They may still be regarded as one of the big underdogs but that's not how they view themselves, and have the results over a long time to prove it. Before the end of the 1990s, Zimbabwe had beaten every major cricket playing country at least once in a one-day International. In 1999 and 2003 they made it to the Super Six stage of the World Cup. They beat Australia last year and in their final warm-up before the World Cup they upset Sri Lanka. "It gives us a lot of confidence. It gives us a lot of the belief that we do need as a team, that it's possible to beat a big team," said Zimbabwe captain Elton Chigumbura. "We're looking forward to the main games now, and hopefully the guys who performed well will carry on with their form and hopefully finish on the better side." Zimbabwe's first match is against South Africa in Hamilton on Sunday. Zimbabwe have only beaten their African neighbours twice in 37 clashes but Chigumbura remains unfazed. "Obviously playing a big team is challenging, but at the same time for us, it's also a good opportunity to express ourselves and try and play our best cricket," he said. "If we stick to our game plans and our processes right, at the end of the day it's about the team that plays the best cricket on the day." Zimbabwe are not without any chance of progressing in the tournament. Drawn in Pool B with South Africa, India, Pakistan, West Indies, Ireland and United Arab Emirates, they will probably have to win three games to reach the quarter-finals. They will start as clear favourites to beat the UAE and slight favourites to beat Ireland, with the West Indies looming as perhaps the key match. "Looking at the results before, people can call us small team but I believe this tournament, if we play our best cricket, the tables will change," Chigumbura said. "Looking at the games that we have played recently, they are good signs. Guys are believing that they belong here, so now it's obviously about the main games, we just don't have to panic."