Zimbabwe's Mnangagwa to be sworn in as president on Friday 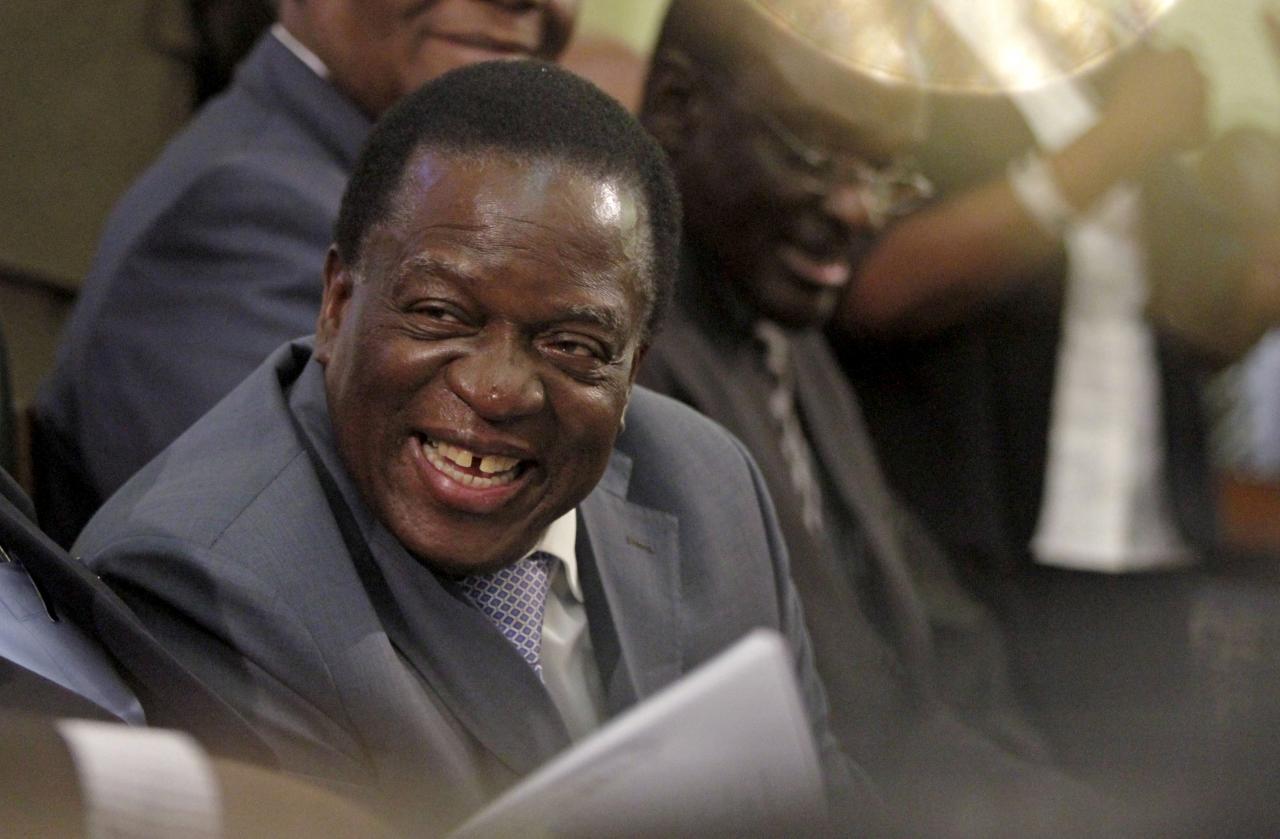 Zimbabwe's Mnangagwa to be sworn in as president on Friday

Mnangagwa, who fled for his safety after Mugabe sacked him two weeks ago, will land at Manyame Airbase in Harare at 6pm (1600 GMT), ZBC said. Mnangagwa's sacking prompted the military takeover that forced Mugabe out.

Mugabe's downfall came suddenly for a man once feted across Africa as a liberation hero for leading his country to independence from Britain in 1980 after a war.

The 93-year-old had clung on for a week after the army takeover, with ZANU-PF urging him to go. He finally resigned on Tuesday moments after parliament began an impeachment process seen as the only legal way to force him out.

People danced in the streets of Harare and car horns blared at the news that the Mugabe era was finally over. Some brandished posters of Mnangagwa and army chief General Constantino Chiwenga.

Speaker of parliament Jacob Mudenda is due to hold a news conference at 1030 GMT.

Mugabe led Zimbabwe from relative prosperity to economic ruin, presiding over the forced takeover of white-owned farms at the end of the century, which devastated agricultural foreign exchange earnings and led to hyperinflation.

Alleged human rights abuses and flawed elections prompted many Western countries to impose sanctions in the early-2000s, that worsened the economic problems.

Though new investment from China softened the blow, most of Zimbabwe's 16 million people remain poor, squeezed by chronic currency shortages and sky-high unemployment.

If Mnangagwa can arrest Zimbabwe's economic decline, deliver clean elections next year and woo back bilateral support from Western states, new investment could begin to flow.

"The transition from Mugabe to Mnangagwa could mark a major and positive shift and put Zimbabwe back on the foreign investor radar," head of equity research at emerging market bank Exotix Capital, Hasnain Malik, said in a note.

"Many of the ingredients of a great frontier market are in place in Zimbabwe: human capital, infrastructure, natural resources and diaspora."

However, there are doubts about Mnangagwa's reform credentials, while a large section of the Zimbabwean public are hostile towards a man who, like Mugabe, stands accused of participating in repression.

He was internal security chief in the mid-1980s when Mugabe deployed a North Korean-trained brigade against rebels during which 20,000 civilians were killed, according to rights groups.

"The dark past is not going to disappear. They will be following him around like a piece of chewing gum on his shoe," International Crisis Group's southern Africa senior consultant Piers Pigou said.

"For him to really be seen to be doing the right thing, he's going to have to introduce policies that fundamentally undermine the power structures of ZANU-PF, through a shift to genuine political pluralism and a decoupling of the party and state."

Nicknamed "Ngwena", or crocodile in the Shona language, an animal famed in Zimbabwean lore for its stealth and ruthlessness, Mnangagwa issued a statement from hiding on Tuesday calling on Zimbabweans to unite to rebuild the country.