Zlatan turns provider as Sweden sign off with Wales win 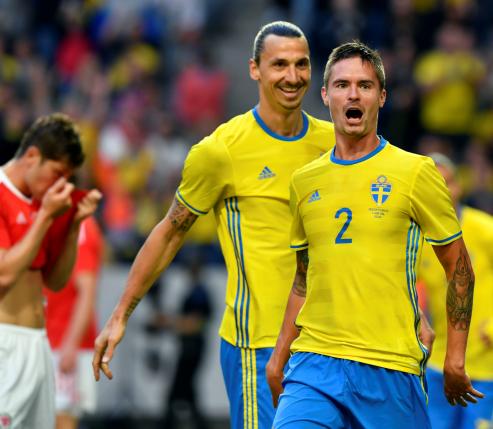 Zlatan turns provider as Sweden sign off with Wales win

STOCKHOLM - Sweden finished their home preparations for Euro 2016 with a resounding 3-0 win over fellow qualifiers Wales and for once did not have to rely on the finishing of captain and record goalscorer Zlatan Ibrahimovic. The win gave Sweden a boost before they kick off their campaign against Ireland on Monday, while the Welsh must pick themselves up for their first game versus Slovakia on Saturday. Over 37,000 fans came to see Sweden off and goals from Emil Forsberg, Mikael Lustig and John Guidetti, with Ibra making the pass for the opener, secured a comfortable win. "Victories are always fun. I'm happy we scored three goals, and that the three goalscorers aren't named Zlatan," Sweden coach Erik Hamren told a news conference after the game. Ibrahimovic scored more than half of Sweden's goals in qualifying but it was winger Forsberg who opened the scoring in the first half, and he looks to have forged an excellent understanding with his captain. Full back Lustig added a second goal and Guidetti, a central figure in the Sweden team that won the under-21 European Championship last summer, rounded off the scoring with his first goal for the senior side. The result was a much-needed shot in the arm for the Swedes after a dull scoreless draw against Slovenia in Malmo on Monday. "We corrected some things after the Slovenia game, so in general the feeling is good," Hamren said. "But we must raise ourselves considerably before the group games start, both offensively and defensively." For Wales coach Chris Coleman the result was a reality check as they head into Group B also featuring England and Russia. "We get a bit of success, a bit of expectation, sometimes a little bit of complacency and that can give you a little slap in the face," said Coleman, who kept talisman Gareth Bale on the bench for over an hour before bringing him on. "Maybe that's what's happened to us, certainly today. It doesn't mean we can't produce something special (at Euro 2016), because we're capable of it." Sweden, who also face Belgium and Italy in Group E, will on Wednesday head to their France training base in Saint Nazaire after two days off following the win over Wales. -Reuters