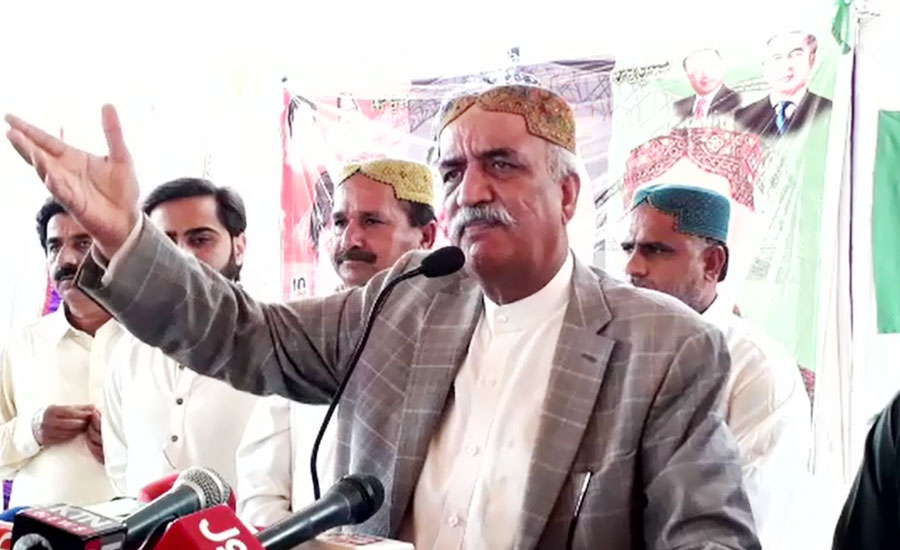 SUKKUR (92 News) – Pakistan Peoples’ Party (PPP) senior leader Khursheed Shah on Sunday regretted that former prime minister Zulfikar Ali Bhutto’s grandson PPP Chairman Bilawal Bhutto was being branded traitor. Speaking at the event, the former opposition leader said that everyone knew the politics the Bhutto family had been doing. He also said that the resolutions may be come in Sindh and National Assembly if the resolution against the PPP chairman would be presented in Punjab Assembly. Criticizing the ruling Pakistan Tehreek-e-Insaf (PTI), he said that the poor people are reeling under inflation owing to the government’s ‘failed’ economic policies. The PPP leader further said that inflation was taking a heavy toll on the country. Khursheed said the PPP chairman would lead a train march from Rohri to Rawalpindi on March 27, adding that the march was aimed at pulling the people out of suffering. “This march is for the people’s rights and against corruption.” Shah appealed to people to join the PPP chief’s march and hopped wherever they will go people will support them. He termed opposition parties had 65 per cent of the people’s mandate, adding Pakistan couldn’t stand political disagreement. Khursheed Shah also announced to boycott government’s briefing on the National Action Plan (NAP) in the Foreign Office. He mentioned that the government should brief the parliamentary leaders in the parliament and take house into the confidence over the NAP rather than in the FO. On the occasion, the PPP senior leader also adopted a unique style in public gathering and put out money from the one person and gave to another.

Khursheed says govt will be responsible for any harm to Nawaz

Earlier, PPP leader Khursheed Shah said if anything adverse happened to incarcerated former premier Nawaz Sharif, it would be considered a murder and the government would be responsible for it.
Speaking to the journalists after inaugurating plantation campaign, Khursheed Shah expressed concern over Nawaz’s deteriorating health and his health is not well, and it will be considered a murder if something happens to him. The previous political opponent of the Pakistan Muslim League-N (PML-N) also spoke in support to the PML-N quid and also urged the people to pray for the health and well-being.