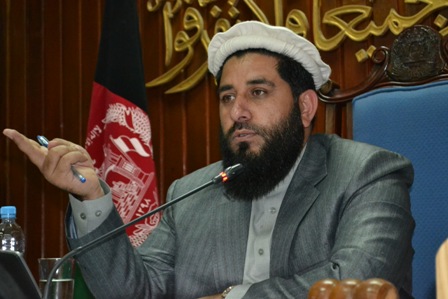 KABUL (Reuters) - A senior Afghan lawmaker has warned President Ashraf Ghani about relying on Pakistan to help broker peace talks with the Taliban, citing what he said was Islamabad's history of supporting the insurgents. Afghanistan has long accused Pakistan of backing the Taliban to push its own agenda in the war-torn country, and Ghani's rapprochement with Islamabad since coming to power last year has led to unease in some quarters. "I am in support of peace and stability in Afghanistan, but I don't have much faith in Pakistan's honesty over peace talks," Fazil Hadi Muslimyar, speaker of the upper house of parliament, told Reuters. "President Ashraf Ghani must have a guarantee from Pakistan that if the Taliban enter into negotiations, Pakistan will not use other militants as proxies [to fight against Afghanistan]," he said. Rangin Dadfar Spanta, a former national security adviser in the last government, said he supported the peace initiative, but also had concerns about Pakistan's role in the process. "Pakistan's military and its intelligence agency are the forces behind the Taliban, and that prevents me from being hopeful," Spanta said. Ghani's government, meanwhile, has told skeptics that Pakistan is committed to peace talks aimed at ending 13 years of conflict between the Taliban, ousted in a US-led war in 2001, and Afghan and foreign forces. "Recent messages and actions from Pakistan indicate that Pakistan is committed to bringing peace and stability to Afghanistan," a spokesman for Ghani said. A record 3,700 civilians were killed in the conflict last year and thousands more Afghan soldiers and police, as foreign combat troops withdrew from Afghanistan and left security to local forces who complain of lack of equipment and training. Previous attempts to bring Taliban insurgents to the negotiating table have failed in recent years, and there are major hurdles in the way of progress this time around, despite the involvement of China in the latest push for peace. Sources within Afghanistan's intelligence community say the Taliban movement has splintered, with several commanders emerging to challenge the supremacy of Mullah Mohammad Omar, the reclusive leader not seen in public since 2001. Yet last month, senior Pakistani military officials visited Kabul and told Afghan leaders that senior figures with the Afghan Taliban had signaled they were willing to open peace talks, Afghan and Pakistani officials said. The Taliban publicly cast doubt on the talks, saying they opposed negotiations, but senior Taliban commanders and Pakistani military officials said efforts to get talks going were still underway. Pakistan, which was one of only three countries to have diplomatic relations with the Taliban's radical Islamist regime, denies accusations that it supports insurgents and shelters their leaders. However, Pakistani officials have acknowledged contact with Taliban figures in the recent push for talks.