KABUL (92 News) – Following the preconditions of Taliban for the resumption of peace talks with Kabul, including their removal from international terror blacklists, at an informal meeting with lawmakers and activists in Doha, the future of Peace Talks seems shadowy.

Afghan President Ashraf Ghani said that the war would escalate if the dialogues with Afghan Taliban could not start until April. “The government is open to talking with Taliban groups and is ready to discuss their concerns, but for the Taliban to set condition for talks is unacceptable,” he said.

Ghani said that it will also affect Pakistan if the talks could not be resumed, adding that February and March are important for dialogues.

Participants, who attended the two-day conference on an individual basis rather than as the government’s representatives, included Afghan president Ghani’s uncle Qayyum Kochai, an informal adviser to the president on peace-related issues and Malalai Shinwari, another adviser who was one of the few women in attendance.

Members of the Taliban’s political office in Qatar began two days of discussions with an Afghan delegation as momentum grows for the start of a formal peace process. The militant group emphasized a hardline stance on talks aimed at ending its 14-year insurgency, ruling out negotiations until Taliban preconditions were met.

“As long as foreign forces are in Afghanistan, peace and stability is impossible,” Mohammad Naim Wardak, a member of the Taliban delegation, said. “We will take every path which leads to the withdrawal of foreign troops from Afghanistan and to the establishment of an Islamic system.”

“Before any official talks, we want names of our mujahedeen to be removed from UN and US blacklists and all bounties on their heads be cancelled,” Taliban spokesman Zabiullah Mujahid said, listing the group’s demands at the Qatar conference. “We also want our political office in Doha to be officially reopened.” 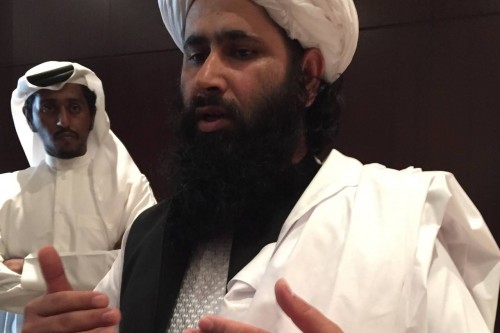