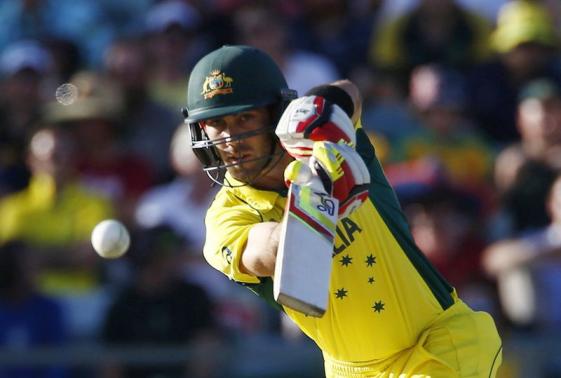 PERTH (Reuters) - Australia flexed their batting muscles to rack up the highest ever World Cup total as they crushed Afghanistan by a tournament record margin to revive their stuttering campaign on Wednesday. Opener David Warner's career-best 178 and middle order batsman Glenn Maxwell's 88 from a 39-ball blitz powered the four-time champions to 417 for six wickets at the WACA ground. Michael Clarke's men returned to bowl out Afghanistan for 142 in the 38th over for a 275-run victory in a mismatch between the most successful World Cup team and the tournament debutants. India's 413-5 against Bermuda in 2007 was the previous highest World Cup total with their 257-run win the biggest margin. Nawroz Mangal (33) top scored for Afghanistan before Mitchell Johnson (4-22) and his fellow bowlers got them out. Having shared the points with Bangladesh after a washout in Brisbane and been pipped by New Zealand in Saturday's low-scoring thriller, Australia needed a big win to revive their campaign and Afghanistan were easy meat for the world's number one team. Warner forged a 260-run partnership with Steve Smith (95), an Australian record for any wicket, and Maxwell dazzled down the order in an amazing display of batting pyrotechnics by the tournament co-hosts. Warner hit five sixes and 19 fours in his belligerent knock before being dismissed in the 38th over. EARLY SUCCESS Encouraged by the moisture on the pitch, Afghanistan captain Mohammad Nabi decided to field and his team tasted early success when Dawlat Zadran forced an outside edge to dismiss Aaron Finch (four) in the third over. The Afghan bowlers began tightly but whenever they got carried away by the WACA bounce and bowled short, despite lacking the pace to make the ploy work, Warner pulled them with impunity. The 28-year-old southpaw hit Hamid Hassan, wearing a headband and with war paint on his face, for three boundaries in the 10th over to race to his 50 in 40 balls. Warner broke loose after registering his fourth ODI century in 92 balls and hit Dawlat for back-to-back sixes, a treatment he would hand out to Shapoor as well, as his next 50 came off 24 balls. Smith also helped himself to his first fifty of the tournament but such was Warner's domination at the other end that hardly anyone noticed. Even after Warner's exit, there was no respite for the Afghans as Maxwell unfurled his wide range of shots, including cheeky as well as conventional slogging, to hit seven sixes and six boundaries. Maxwell made a mockery of the field setting, playing reverse shots -- sweep, flick and scoop -- and hitting genuine fast bowlers behind the wicket with ridiculous ease. This was the third 400-plus total of this year's World Cup after South Africa posted the first two.