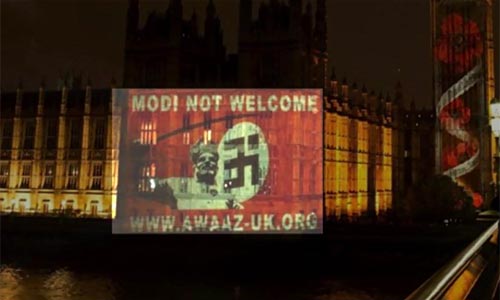 LONDON – A day after BJP’s humiliating defeat in the Bihar elections, Indians in Britain projected the words "Modi not welcome" on the British Parliament ahead of Modi’s UK visit, reported 92 News. The protest against Modi's UK visit is being led by the Awaaz Network which has been mobilizing people to join them in a protest planned for the day Modi will speak at the British Parliament. A spokesperson for the Awaaz Network said that "Modi wants to sell the idea of a 'Digital India', 'a clean India' and a developed and self-sufficient India. “The reality is the unleashing of a violence authoritarian agenda that seeks to undermine India's democratic and secular fabric." When the projection was put out, the Awaaz Network also put tweets with the photograph, decrying his alleged role in the 2002 Gujarat riots. One tweet read: "Let us not turn a blind eye to Modi's actions in Gujarat 2002. He has to answer the riot victims." The second tweet read: "Modi Not Welcome is a protest to remind the world of Modi's real face... including Godhra 2002. UK protests!" Yet another tweet read, "Modi Not Welcome in UK, he has the blood of innocents on his hands!" Another one read, "Modi Not Welcome in UK, he has overseen the preplanned killings of innocent Muslims in Gujarat 2002." The Awaaz Network has the support of other organizations such as the South Asia solidarity Group, Sikh Federation UK, Southall, Black Sisters, Dalit Solidarity Network UK, Indian Muslim Federation, Indian Workers Association as well as the Muslim Parliament and Voice of Dalit International.