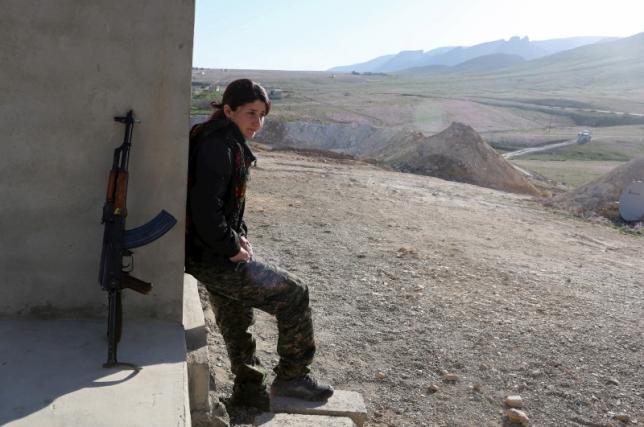 NEAR SINJAR TOWN - Kurdish forces launched an offensive on Thursday to retake the northern Iraqi town of Sinjar from Islamic State militants who overran it more than a year ago, killing and enslaving thousands of its Yazidi residents and triggering US-led air strikes. Operation Free Sinjar aims to cordon off the town, take control of Islamic State supply routes and establish a buffer zone to protect the town from artillery, a statement from the Kurdish national security council said. Sinjar is a symbolic and strategic prize, sitting astride the main highway linking the cities of Mosul and Raqqa - Islamic State's bastions in Iraq and Syria. US-led coalition air strikes pounded Islamic State-held areas in the town overnight, as around 7,500 Kurdish special forces, peshmerga and Yazidi fighters descended from the eponymous mountain towards the frontline in a military convoy. Kurdish forces and the US military said the number of Islamic State fighters in the town had increased to nearly 600 after reinforcements arrived in the run-up to the offensive, which has been expected for weeks but delayed by weather and friction between various Kurdish and Yazidi forces in Sinjar. The offensive is being personally overseen by Kurdistan regional president Massoud Barzani, who is also head of the Kurdistan Democratic Party (KDP), which other groups in the area accuse of seeking to monopolise power. Many Yazidis lost faith in the KDP when its forces failed to protect them from Islamic State militants, who consider them devil worshippers, when the group attacked Sinjar in August 2014, systematically slaughtering, enslaving and raping thousands of them. A Syrian affiliate of the Kurdistan Workers' Party (PKK) came to the rescue, evacuating thousands of Yazidis stranded on Sinjar mountain and establishing a permanent base there. Most Yazidis have been displaced to camps in the Kurdistan region; several thousand remain in Islamic State captivity. LAND AND HONOUR The PKK has trained a Yazidi militia in Sinjar, while tribal groups operate independently. Several thousand Yazidis have also joined the peshmerga. For Yazidi forces taking part, the battle is very much about retribution. Hussein Derbo, the head of a peshmerga battalion made up of 440 Yazidis, said the men under his command could have migrated to Europe but chose to stay and fight. "It is our land and our honour. They (Islamic State) stole our dignity. We want to get it back," he told Reuters in a village on the northern outskirts of Sinjar town. Derbo's brother, Farman, echoed the sentiment, saying he hoped the militants did not retreat from battle so that the Yazidis could kill them all. The forces, many wearing the thick moustache typical of Yazidis and carrying light weapons, had gathered at a staging position overnight. They travelled in a peshmerga convoy comprised of Humvees on flatbed trucks, heavy artillery, and fighters waving Kurdish flags, flashing peace signs or brandishing their rifles. Hundreds of vehicles winded slowly downhill along the same road Yazidis had fled up last summer seeking safety from Islamic State. Abandoned cars and blood-stained clothing on the roadside were reminders of those chaotic scenes. Around dawn, the fighters piled into their vehicles and headed to the front. Authorising the first strikes against Islamic State in August 2014, US President Barack Obama cited a duty to prevent a genocide of Yazidis by the radical Islamists. The US-led coalition has carried out dozens of strikes in the past few weeks in support of the peshmerga, apparently coordinated with the Sinjar offensive. In December 2014, Kurdish forces drove Islamic State from north of Sinjar mountain, a craggy strip some 60 km (40 miles) long, but the radical Sunni insurgents maintain control of the southern side where the town is located. The peshmerga currently control about 20 percent of the town. Backed by US air strikes, the peshmerga have also regained most of the ground they consider historically Kurdish. Sinjar is part of the disputed territories to which both the Iraqi federal government and regional Kurdish authorities lay claim. -Reuters