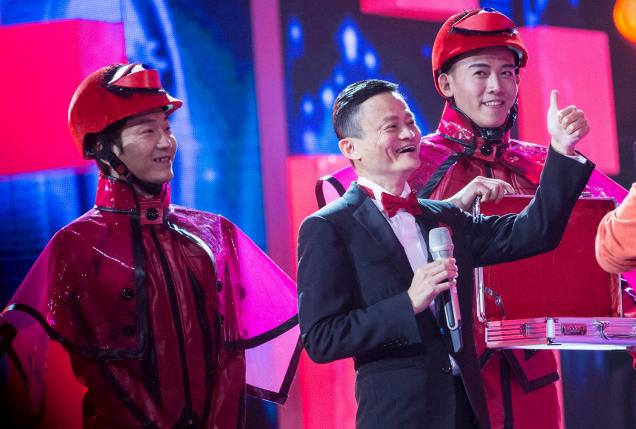 BEIJING - Alibaba Group Holding Ltd's total value of goods transacted during its Singles' Day shopping festival was 91.2 billion yuan ($14.32 billion), the Chinese e-commerce giant said in Beijing on Thursday. The numbers got a boost this year from adding the sales from various new channels, including its affiliates and investees. In all, the figure for this year's Singles' Day is up 60 percent from 2014. The results are preliminary and unaudited, Alibaba said. Of the total value of transactions, 68 percent was through orders from mobile devices. Six years ago, Alibaba turned Nov. 11 into China's equivalent of United States shopping event Cyber Monday. It has now become larger than both Cyber Monday and Black Friday combined, and a closely watched barometer of the company's performance. "Alibaba is positioned as the number one player in the Chinese e-commerce market, so it has to be seen to be maintaining, or gaining ground really," said Duncan Clark, chairman of Beijing-based tech consultancy BDA. The company shares were trading down 2.1 percent at $79.71 in New York at 1713 GMT (12:13 pm ET) on Wednesday, after the shopping festival's results were announced. Singles' Day was originally a mock celebration in China for people not in relationships. But Alibaba in 2009 co-opted the event into a consumption-fest for all, featuring steep discounts and other promotions aimed at attracting droves of customers online. Alibaba's sales data have been closely watched as a gauge of Chinese consumption as economic growth slows. One of the new sales channel pumping Alibaba's Singles' Day sales was Suning Commerce Group Co, in which it bought a 20 percent stake in August. Suning's in-store sales will count toward Alibaba's total gross merchandise volume, as long as they go through final processing online, an Alibaba spokesman said. Alibaba has stressed its focus on international e-commerce this Singles' Day. "Within the next five years, we expect China will become the world's largest e-commerce market for imported products," President Michael Evans told reporters on Wednesday. However, the event could be risky for brands, said Brian Buchwald, CEO of consumer intelligence firm Bomoda. "If you're a new brand to the market, you don't want to train your consumer to wait for a sale but you also need to use this holiday to break in with a top spending consumer," Buchwald said. "In the end, you want the consumer to come back and pay full price." Speaking at the company's Singles' Day celebration in Beijing, Jack Ma, the company's eccentric founder and executive chairman, told reporters the event's annual growth in the future should be over 50 percent. -Reuters