MOSCOW (92 News) – Pakistani singer Fakhre Alam, who is on a Mission Parwaz, has been detained by Russian authorities at Yuzhno-Sakhalinsk airport as his visa was expired two hours ago before landing the eastern city, Faysal Quraishi shared on his social media accounts.

Alam had embarked on a distinct journey earlier this month of circumnavigating the globe becoming the first Pakistani to do so.

The 46-year-old singer arrived in Japan on Sunday and updated his fans on the next stops.

Pakistan Ambassador in Moscow has spoken to Fakhr-e-Alam and is also in touch with Russian authorities, Foreign Office spokesman Dr Mohammad said. Problem will hopefully be resolved soon, he further stated.

Thank you 🙏🏼 “We are in contact with Russian authorities and are extending all possible assistance”, Pakistani Ambassador to Russia Qazi Khalil Ullah on Fakhre Alam visa issue @pid_gov 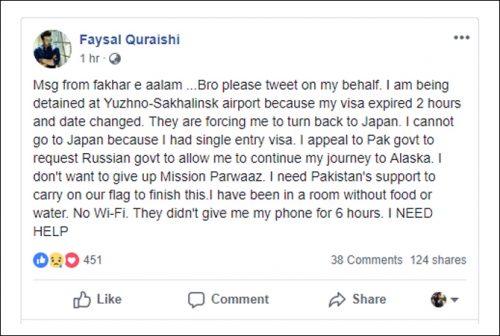 Taking to Twitter, Fakhr-e-Alam left a message for his supporters and cited of how unbelievable it is to have a dream come to reality as he hangs around Nagoya, Japan during his mission to circumnavigate the world in 28 days.

“#MissionParwaaz message from Japan…sorry I look very haggered and tired but I have been going through time zones and very less sleep”, he wrote.

There’s a tough time ahead of him as he reaches the other side of the planet through different time zones, only to stay alert for the onward Northern specifics crossing that is to come with extreme freezing temperatures.