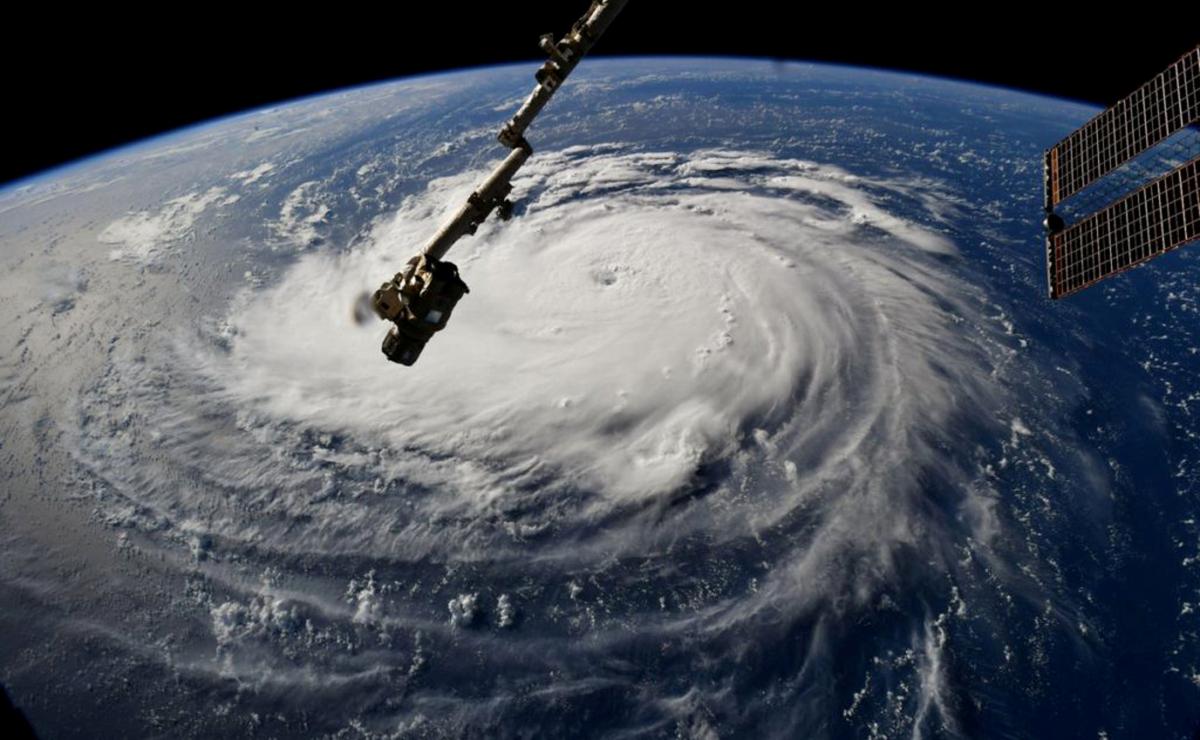 HOLDEN BEACH, NC (Reuters) - Hurricane Florence, the most powerful storm to menace the Carolina coast in nearly three decades, intensified into a Category 4 hurricane on Monday, prompting evacuations of more than 1 million people to higher ground.
With maximum sustained winds of 140 miles per hour (220 kph), Florence was due to get even stronger before making landfall on Thursday, the National Hurricane Center in Miami said. Authorities worried about the storm’s potential to unleash prolonged torrential rains and widespread flooding across several states, especially if it lingers inland for several days. “Florence is expected to be an extremely dangerous major hurricane through Thursday,” the NHC said in its latest bulletin. Maps of the storm’s trajectory showed it most likely to hit the North Carolina shore near the South Carolina border, making it the most powerful storm to threaten the US mainland this year and the first of its magnitude in 29 years to strike the Carolinas. Emergency declarations were issued by the governors in both states, as well as in Virginia and Maryland. “We are in the bull’s-eye,” North Carolina Governor Roy Cooper told a news conference. South Carolina Governor Henry McMaster estimated about 1 million residents were under orders to evacuate the coast of his state. North Carolina has ordered the evacuation of more than 50,000 people from Hatteras and Ocracoke, the southernmost of its Outer Banks barrier islands. Emergency management officials reported waves already starting to crash over the islands’ main highway where dunes were breached by heavy surf, slowing traffic to a crawl. “Traffic was backed up for about 9 miles (14 km) in places,” said Paul Jones, a retiree who owns a vacation home on Hatteras Island. An estimated 250,000 more people from the northern Outer Banks were due to be sent to higher ground starting at Tuesday midday.

Florence grew into a major hurricane on Monday morning and was upgraded again to a Category 4 on the five-step Saffir-Simpson scale of hurricane strength at midday as its top sustained wind speeds reached 130 mph. By evening, the storm was centred about 1,170 miles (1,880 km) east-southeast of Cape Fear, North Carolina, the NHC said. The last Category 4 storm to hit the Carolinas was Hugo, which barrelled into Charleston, South Carolina, in 1989. US President Donald Trump, whose administration was criticized as being slow to respond to Hurricane Maria in Puerto Rico last year, cancelled a political rally planned for Friday in Jackson, Mississippi, over safety concerns related to Florence, his campaign said. “To the incredible citizens of North Carolina, South Carolina and the entire East Coast - the storm looks very bad! Please take all necessary precautions,” Trump wrote on Twitter. In Holden Beach, North Carolina, in the storm’s path, longtime residents were boarding up homes and securing possessions. “It’s scary to all of us. We know we can’t play around with this,” said Jennifer Oosterwyk, who owns the Sugar Britches boutique on Holden Beach and lives in nearby Wilmington. She was gathering up important papers and preparing to drive inland to ride out the storm. A BP service station and mini-mart in Wilmington ran out of gasoline for about two hours on Monday as motorists rushed to fill up their tanks. “People are getting frantic,” manager Nadine Schrock said, adding her shop also sold out cases of bottled water. The US military said it was sending an advance team to Raleigh, North Carolina, to coordinate with federal and state partners. It said about 750 military personnel would be designated to provide support. The US Navy said it was sending nearly 30 ships from coastal Virginia out of port to ride out the storm. Other military personnel, however, could find themselves directly in harm’s way. The largest US Marine Corps base on the East Coast, Camp Lejeune and its extensive beachfront northeast of Wilmington, North Carolina, lie within the NHC’s forecast “cone” for possible landfall.

Florence is likely to bring a deadly coastal storm surge to the Carolinas and Virginia, with “staggering” rainfall that may extend hundreds of miles inland and cause flash flooding across parts of the mid-Atlantic region, NHC Director Ken Graham said in an evening webcast. Forecasts call for 10 to 15 inches (25-38 cm) of rain in the hardest-hit areas, possibly more if the storm stalls over land, as expected, Graham said. Virginia’s emergency operations chief, Jeffrey Stern, told reporters that residents should brace for “something that no one in Virginia has experienced in their lifetimes.” Immediately to the north of Virginia, Maryland Governor Larry Hogan said his state was also “preparing for the potential of historic, catastrophic and life-threatening flooding.” The United States was hit with a series of high-powered hurricanes last year, including Hurricane Maria, which killed about 3,000 people in Puerto Rico, and Hurricane Harvey, which killed 68 and caused an estimated $1.25 billion in damage from catastrophic flooding in Houston.