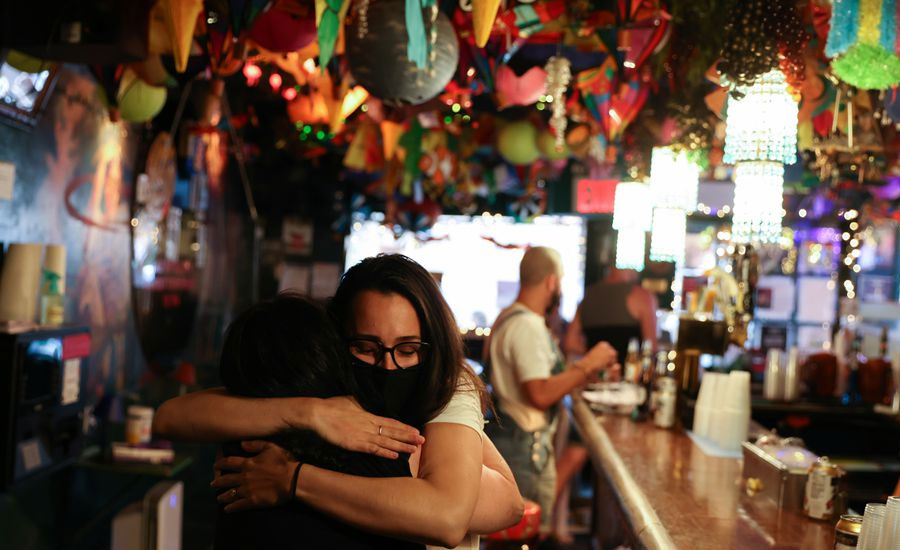 (Reuters) - At Henrietta Hudson, one of New York City's most iconic LGBTQ hangouts, co-owner Lisa Cannistraci had long mulled a makeover but put off tackling the changes while business was good.

Then COVID-19 hit. In March 2020, even before authorities ordered businesses to shut down, Cannistraci closed the bar and resolved to use the pause from the pandemic as a chance to transform the historic space in Manhattan's West Village.

Fifteen months later, Henrietta Hudson is welcoming patrons back to a club reimagined as a lounge with sitting areas and plates of charcuterie to accompany its dance floor.

The re-opening coincides with this month's LGBTQ Pride commemorations, which also are making a comeback across the United States as the coronavirus pandemic abates and vaccination rates rise.

In New York, a year after the city's massive Pride march was forced to go mostly virtual, some in-person events are once again planned for June 27, along with a string of online gatherings throughout the month.

"The community needs it now more than ever," said Cannistraci, surrounded by boxes and new furniture in the bar's dim light last week. "I just want to give them the best Pride that I can possibly do."

Henrietta Hudson, which catered mainly to the lesbian community when it first opened in 1991, this year was re-branded by its owners as a "Queer Human Bar Built by Lesbians" as part of an effort to reach younger LGBTQ people who defy sexual orientation and gender identity labels.

Cannistraci said she used all the tools at her disposal to preserve the business, including pandemic loans and contributions from the community.

But COVID-19 dealt a hard blow to the shrinking number of lesbian bars throughout the country, as well as the broader restaurant and nightclub industry.

About 90,000 eating and drinking venues remain closed, permanently or long-term, in the United States, according to a recent surveyby the National Restaurant Association.

"This past year was really, really hard," said Lisa Menichino, the owner of Cubbyhole, another historic lesbian bar in the West Village.

The pandemic forced Cubbyhole to close last year for the first time in its 27-year history. Menichino said she wasn't sure the business would survive.

"I went into kind of a funk and stayed in my pajamas... Drank a lot of bourbon," she recalled during an interview.

Then she said she started getting messages from regulars and other customers who shared the milestones they had experienced at Cubbyhole - meeting their future spouse, coming out, someone's first kiss.

Those memories spurred Menichino into action. The bar set up a GoFundMe page and reached its $30,000 goal in less than 24 hours, a sum that would more than double in a year. The money helped keep the bar afloat, said Menichino, sitting at one of the outdoor tables installed beneath paper lanterns and white lights for safer gathering during the pandemic.

Erica Rose and Elina Street conceived the project over phone conversations in the early days of the pandemic, as they reminisced about their favorite LGBTQ hangouts in New York.

They said they were taken aback to discover how few lesbian bars remained - 21 across the country, by their count so far, down from roughly 200 in the 1980s.

Their project raised more than $117,000 during a campaign launched last fall, and the two filmmakers on Thursday are releasing a long-form documentrythat dives into the bars' stories.

Myriad factors have put lesbian and queer bars at risk over the years, the filmmakers said. In some cases, gentrification has wiped out spaces that serve marginalized people, while in others queer women have faced extra financial challenges to keep bars running.

Broader societal acceptance of same-sex couples and marriage equality also have made it easier for gay couples to frequent non-LGBTQ places, they said.

Inclusivity of everyone in the LGBTQ community, including gender-nonconforming people, is key for struggling lesbian and queer spaces, Rose added.

"In order for lesbian bars and queer spaces in general to stay open, we need to be radically inclusive of (the) most vulnerable members of the LGBTQ community," she said.

With the return of in-person Pride gatherings, owners of some queer venues are looking with cautious optimism to a post-pandemic future.

"I'm excited, I'm nervous... I don't want to expect too much," said Cubbyhole's Menichino. But, she added, "We will celebrate one way or the other."