Asad Umar made member of Standing Committee on Finance

Asad Umar made member of Standing Committee on Finance 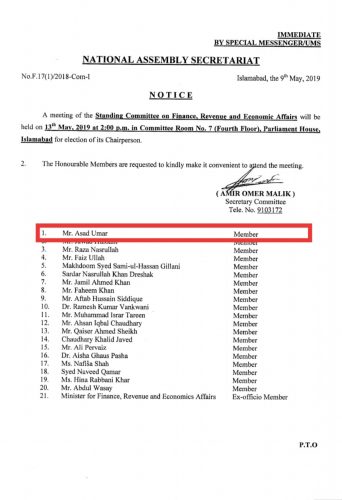 Asad Umar replaces Pakistan Tehreek-e-Insafs’ (PTI) Basit Ahmed Sultan in the committee, states an official notification issued by the National Assembly secretariat. An official meeting to appoint Asad Umer as the head of the committee will be held on Monday, 13th May. It was also reported that Asad Umar to replace Faizullah as the committee’s chairman.

Asad to be appointed as chairman Standing Committee on Finance

Prime Minister Imran Khan gave go ahead to appoint former finance minister Asad Umar as the chairman for National Assembly’s Standing Committee on Finance, Revenue and Economic Affairs. It was reported that the prime minister has informed Asad of his decision and issued directives to National Assembly Chief Whip Amir Dogar. According to the regulations, Umar will be first nominated as a member of the committee and then he will be appointed as the chairman.

A day earlier, the premier met with former finance minister Asad Umar and offered him to rejoin the cabinet.

According to the sources, Umar had a one-to-one meeting with the prime minister today. The meeting was a part of the efforts to convince the former minister to rejoin the cabinet.

Earlier, the former CEO of Engro, who was handpicked by PM Khan as the finance minister to improve economic affairs of the country, was told to resign a few weeks back. Umar decided to quit his office. In a tweet, he said that: “As part of a cabinet reshuffle, Prime Minister Imran Khan desired that I take the energy minister portfolio instead of finance. However, I have obtained his consent to not take any cabinet position.” He said that he strongly believes that Prime Minister Imran Khan is the best hope for Pakistan and Inshallah will make a ‘Naya Pakistan’.