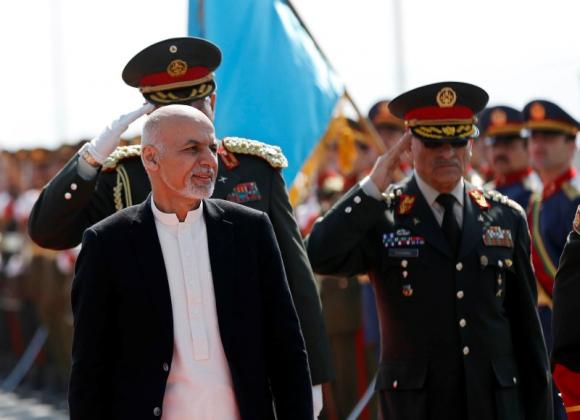 KABUL – President Ashraf Ghani publicly acknowledged for the first time on Saturday that Islamic State was gaining influence in Afghanistan, as he prepared to leave for the United States to seek to slow the withdrawal of American troops. Reports have been growing that some commanders of the Islamist Taliban forces fighting the Afghan government are swearing allegiance to the radical Islamist network that controls swathes ofSyriaand Iraq, sometimes called "Daish". "Daish's characteristic is that it is man-eating. It swallows its competitors," Ghani told reporters in a briefing. "Here, it is not physical presence of people from Syria or Iraq. It is the network effect." The United Nations mission to Afghanistan said recently there was no indication of widespread or systematic direct support for Afghan fighters from IS leaders in the Middle East. However, Ghani, who is due to meet President Barack Obama on Tuesday and to address Congress on Wednesday, said the danger should not be underestimated. Record numbers of Afghan security forces and civilians died last year in the fight against the Taliban, and Ghani said the impending spring fighting season would be tough and could quickly become even tougher with the rise of Islamic State. Ghani also said neighboring Pakistan's military offensives on its northwestern frontier were driving "global terrorist networks" such as al Qaeda into Afghan territory. The prospect of Islamic State gaining a foothold in Afghanistan is expected to be a factor in Obama's decision on whether to slow the planned withdrawal of the 10,000 or so American troops still on the ground in the United States' longest war. Most of these are now training the Afghan army and police, and their numbers are due to drop by nearly half by the end of 2015. Ghani has said that timeline should be re-examined. Ghani has not yet managed to nominate a full cabinet, despite being in office for six months, but he said he would nominate new ministers before leaving for Washington - a bid to show that his efforts to reform the corrupt and inefficient government are progressing. He also said he was "cautiously optimistic" about efforts to open peace negotiations with the Taliban, but that any progress would be slow, and that there had been no face-to-face meetings yet. –Reuters