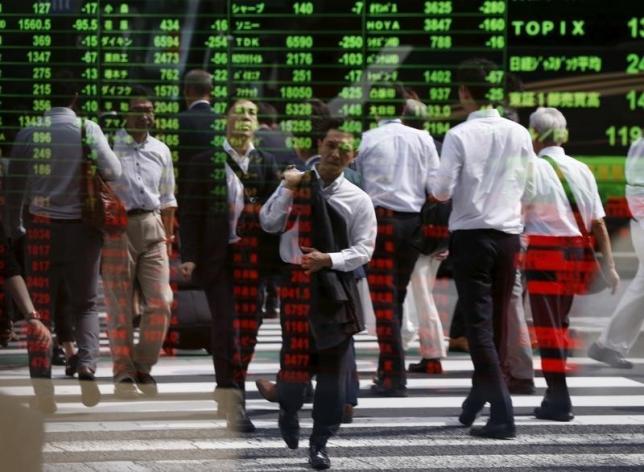 TOKYO - Asian shares rallied on Wednesday with Japanese stocks leading the way, while investors' bigger risk appetite pushed up US debt yields and lifted the dollar. MSCI's broadest index of Asia-Pacific shares outside Japan gained 1.7 percent. Shanghai stocks advanced 1.9 percent, Australian shares gained 0.7 percent and Hong Kong's benchmark jumped 3.0 percent. Tokyo's Nikkei surged 2.4 percent after three firms affiliated with Japan Post made strong trading debut with investors rushing to get a piece of the group's $12 billion initial public offering. "The Japan Post IPO has performed as well as expected this morning, and on top of that we've seen a real sentiment boost based on the monster rally in the US," said Gavin Parry, managing director at Parry International Trading. Large tech and energy sector gains drove US stocks higher on Tuesday, with an index of 100 major Nasdaq companies finishing at a record closing high. Investor appetite for riskier assets drove safe-haven US Treasury yields higher, with the benchmark 10-year note yield climbing to a 1-1/2-month high of 2.225 percent overnight. Higher US debt yields supported the dollar, which gained 0.2 percent to 121.34 yen . The euro dipped 0.2 percent to $1.0946, extending overnight losses. Comments by European Central Bank President Mario Draghi on Tuesday that policymakers are willing and able to act if needed weighed on the common currency. Markets remained firmly fixed on Friday's US non-farm payrolls report and whether the data will support the case for the Federal Reserve to hike interest rates in December. Before Friday's non-farm payrolls, the markets will have a chance to gauge the health of the US economy through the ADP employment data and the ISM report on services sector sentiment due later in the session. "We've seen nonfarm payrolls go in a completely different direction from ADP or ISM and we've also seen average hourly earnings or the unemployment rate trigger a U-turn after the initial reaction to payrolls," wrote Kathy Lien, managing director of FX strategy at BK Asset Management. "So traders are rightfully sceptical about whether the labour market report will confirm the Federal Reserve's hawkish bias until the actual report is released." Elsewhere in currencies, the New Zealand dollar licked its wounds after sliding 1.2 percent overnight on a further decline in dairy prices and soft jobs data. The kiwi last traded down 0.2 percent at $0.6649 . Crude oil took a breather after surging overnight when US gasoline and diesel rallied following an outage on a key pipeline system. The outage added support to oil markets already boosted by strike in Brazil. US crude was effectively flat at $47.86 a barrel after rallying 4 percent on Tuesday. Brent crude dipped 0.1 percent to $50.50 a barrel after surging 3.6 percent. -Reuters