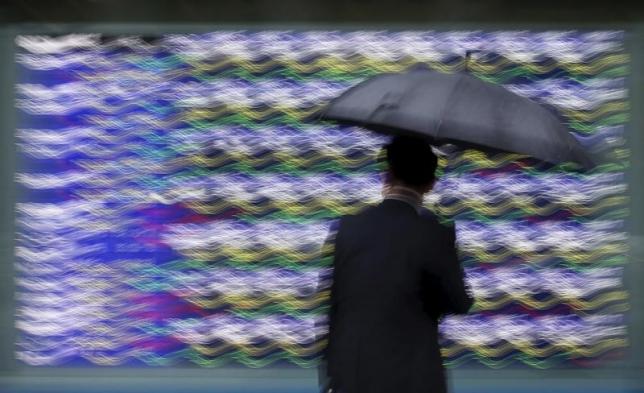 TOKYO - Asian stocks were mixed, with Japanese and Chinese shares up, while the dollar stood at a 7-month high against its peers on Monday after robust US jobs data bolstered expectations of an imminent Federal Reserve interest rate hike. The stronger dollar in turn knocked commodities like crude oil and gold. With the US jobs release out of the way, spreadbetters are forecasting a slightly higher open for Britain's FTSE, Germany's DAX and France's CAC. Data on Friday showed nonfarm payrolls increased 271,000 in October, the largest gain since last December 2014. The US unemployment rate fell to 5.0 percent, the lowest since April 2008. However, the prospects of the Fed hiking rates for the first time in almost a decade and ending seven years of easy monetary policy, which has pump-primed global markets with flush liquidity, weighed on some riskier assets. MSCI's broadest index of Asia-Pacific shares outside Japan declined 1 percent, while Australian shares lost 1.6 percent on lower commodity prices. South Korea's KOSPI dropped 0.6 percent and Indonesian shares lost 1.6 percent. The gainers included Tokyo's Nikkei which rose 2 percent thanks to a sharply weaker yen against the dollar. Shanghai shares advanced 1.6 percent after securities regulators said it would allow initial public offerings to resume after a July halt. The gains also followed disappointing Chinese trade data released on Sunday that showed the world's second largest economy will have to do more to stimulate domestic demand. In recent months, financial markets have been buffeted by uncertainty over the timing of the Fed's rate hike, with some investors worrying that higher borrowing costs in the United States could hurt an already shaky global economy. However, the fall in some Asian stock prices was measured, reflecting trading on Wall Street, which bounced from a selloff to end little changed on Friday. "With (Fed Chair) Janet Yellen holding firm on a December rate hike expectation during her testimony to Congress on Thursday, and then the massive beat from the non-farm payrolls (NFP) on Friday, 2015 has been realigned with the beginning of the year's expectations of at least one rate hike," wrote Evan Lucas, market strategist at IG in Melbourne. "What is also interesting from this realignment is the markets have not thrown a 'tantrum' or gone into 'hysterics' – yet. Time will tell, but the orderly movements of the NFP on Friday suggests the market will take a small increase to the Fed funds rate in its stride." Interest rates futures were pricing in a 70 percent probability that the US central bank will raise borrowing costs next month, according to the CME Group's FedWatch. In currencies, the dollar index, a measure of the greenback's strength against a basket of key currencies, stood near a 7-month high of 99.345. The dollar advanced to a 2-1/2-month peak of 123.48 yen. The euro was steady at $1.0744, in striking distance of a 6-month trough of $1.0704 struck on Friday. Higher Treasury yields supported the US currency. US debt yields soared on Friday in the wake of the strong jobs data, with the 2-year yield reaching a 5-1/2-year high. The dollar's strength is likely to extend ahead of a likely Fed rate hike in December, and could drag on prices of oil and other commodities, said Ben Le Brun, market analyst at OptionsXpress in Sydney. Oil rebounded on bargain hunting after sliding on Friday, but the bullish dollar weighed on the commodity. A stronger greenback makes dollar-denominated commodities like oil expensive for purchasers. Brent crude bounced 0.8 percent to $47.81 a barrel after shedding 1.2 percent on Friday. Spot gold struggled near a 3-month low of $1,084.90 an ounce struck on Friday. -Reuters